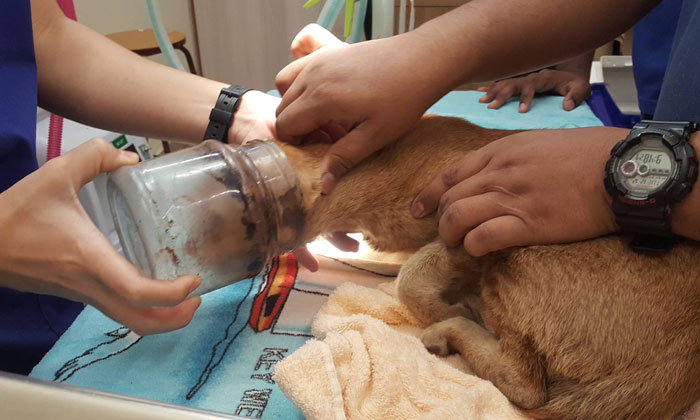 A cat was found with its head stuck in a plastic container at Eunos Road on Dec 11.

The Society for the Prevention of Cruelty to Animals (SPCA) received a call on their hotline at around 10pm alerting them to the cat.

In a Facebook post, the SPCA said that the cat was in distress and ran away when they attempted to approach it.

The local ginger, male cat was, after much patience, eventually caught with a net," the SPCA said in its statement. "He was then brought back to the SPCA and examined by our vet".

The cat's right front paw was found to have sustained a superficial wound, most likely from trying to remove the container itself.

However, apart from that, the SPCA said it was fine.

The organisation added that they took the opportunity to sterilise and microchip the cat and that after observation, it will be released back to the community.

"We thank Linda for looking out for this community cat and for watching over him, while our rescue officers made their way over," said the SPCA.

They also advised the public on how to help an animal if they come across one that is injured, sick or lost:

They will dispatch an animal rescue officer to your location as soon as possible.

2. Help by bringing the animal to a safer location (e.g. away from traffic, off a crowded area) and confine it (in a box or carrier etc). If you are unable to do so, try to stay and keep an eye out for the animal until the officer’s arrival as many times when an officer reaches the location, the animal is nowhere to be found.