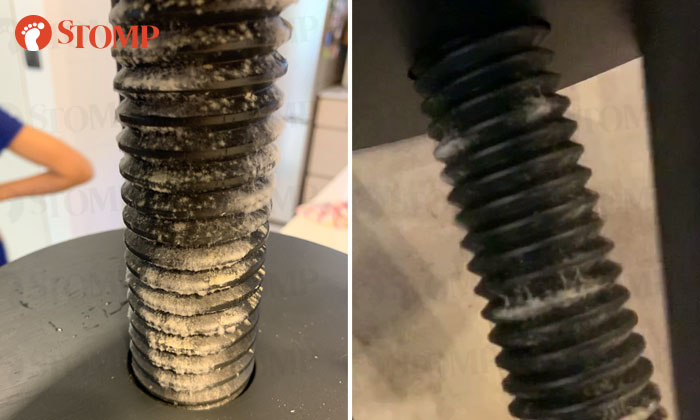 Local furniture firm Castlery told Stomp that it has apologised to one of its customers who found mould on chairs he had ordered from them.

Stomper Nic informed Stomp there was a "thick layer of mould" on the six dining chairs that were delivered to his home on Oct 11.

"The delivery guy insisted I keep the chairs even though he saw the mould when they were unpacked," he said.

"I cleaned the mould off as instructed by the delivery guy but it came back after two days.

"After trying my best to get in touch with customer service, they are looking into it.

"I hope this will remind people to check their products when they are delivered."

In response to a Stomp query, a spokesman from Castlery issued the following statement:

"We are aware of the said customer's feedback and we have reached out to him accordingly.

"Our QC Team at Castlery does their best to perform stringent quality checks on all our products before delivering them out to our valued customers, which is why we truly regret this incident.

"It has definitely contributed to our efforts in improving our quality checks, as we strive to provide an enjoyable experience for all customers.

"At this time, we have expressed our genuine apology and have reached an amicable resolution with the said customer."