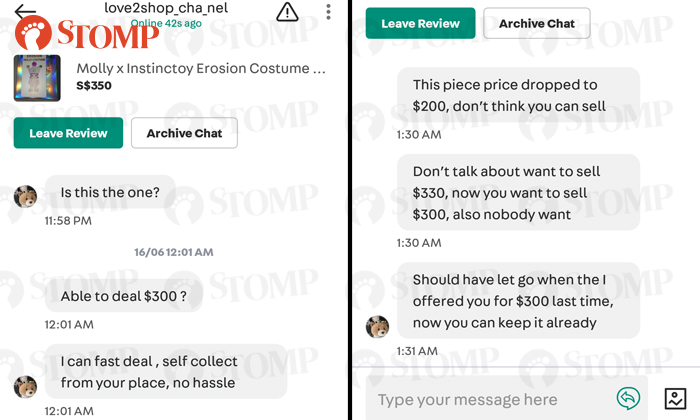 Rejection always stings, whether it's unrequited love or an unsuccessful job interview.

One Carousell user in particular, however, took it particularly hard when her offer to purchase a figurine was turned down.

So much so that the incident apparently remained on her mind for four months, during which she taunted the seller twice.

Stomper Doris shared how she had first encountered the user in June.

The user was keen to purchase a Pop Mart Molly x Instinctoy Erosion Molly Costume Series figurine from Doris and offered $300 in response to the listed price of $350.

Doris told Stomp: "The user showed interest in one of my listings months ago. The deal was not successful because I was not willing to lower price to user's offered price.

"The user subsequently texted me and 'showed off' about how she managed to get the item at lower price than mine. I have ignored the user then.

"And now months later, the user texted me again, saying other sellers are selling the item at even cheaper prices and that I can keep mine.

"What is the problem? I set the price that I'm willing to deal at and this person is sore just because I'm not matching their budget? Whether to keep or sell the item is my choice.

"Is this considered harassment? Please advise this person to go do some volunteer work if they have so much time to check whether I have sold my piece. Contribute more to the needy.

"I don't need them to care if my item has been sold. This is seriously testing my patience."

Read the full conversation in the gallery.