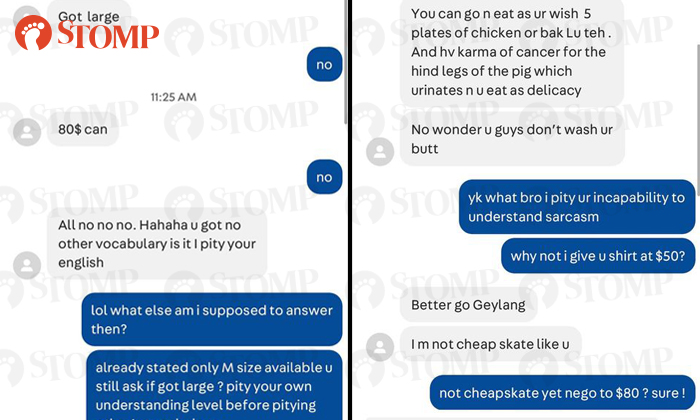 A Carousell user turned to curses and insults after a woman gave him monosyllabic responses to his questions about a T-shirt that she was selling.

Stomper Anon shared screenshots of the conversation that took place on Sunday (May 2), in which a user expressed interest in the Kenzo T-shirt that she was selling for $100.

The user first asked if the shirt was available in a large size, which Anon replied 'no' to.

When he asked if she could lower the price to $80, she replied 'no' as well.

This seemed to upset the user, who asked if Anon had no other vocabulary. He also said he pitied her English.

Anon asked what else was she supposed to answer, and clarified that she had already stated in her listing that the T-shirt was only available in M size.

Referring to his lowballing attempt, she also said, "$20 I can eat 5 plates of chicken rice, bro."

This triggered further insults from the user, who called her a cheapstake and told her to "better go Geylang."

Anon told Stomp that this was the first time she had a "Carouhell experience", adding: "It's upsetting because I've already stated the size and he still asked.

"The fact I bothered to reply and yet he made such crude remarks."

Related Stories
Carousell permanently suspends user, 17, who fled with man's $12k gold chain during meetup
Carousell user tricked by scammer into giving up game account that he was selling for $100
Carousell apologises for 'incorrect' response to report about verbally abusive user
More About:
Carousell
rude
text