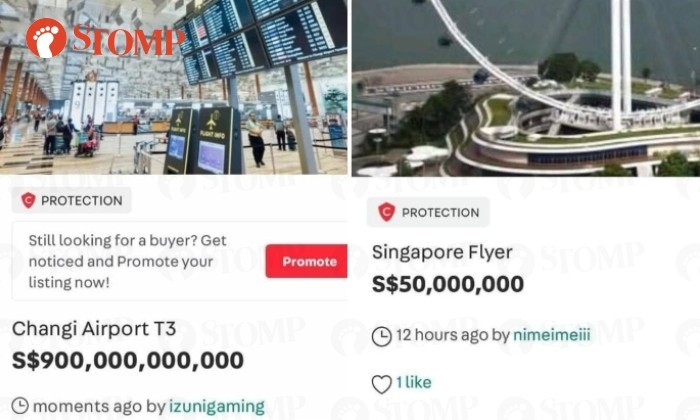 Ever tried searching for an item on Carousell? Sometimes we get our hands on great deals but as good as these offers can be, it is also inevitable to come across items with ridiculous price tags.

So while most of us have seen items being sold for exorbitant prices, some Singaporeans have decided to take things to the next level -- by 'selling' buildings and monuments that cost an arm and a leg.

Stomper Yu said he was scrolling through Instagram when he saw screenshots that showed Carousell listings 'selling' Changi Airport Terminal 3, Singapore Flyer and the Parliament House for hundreds of millions of dollars. 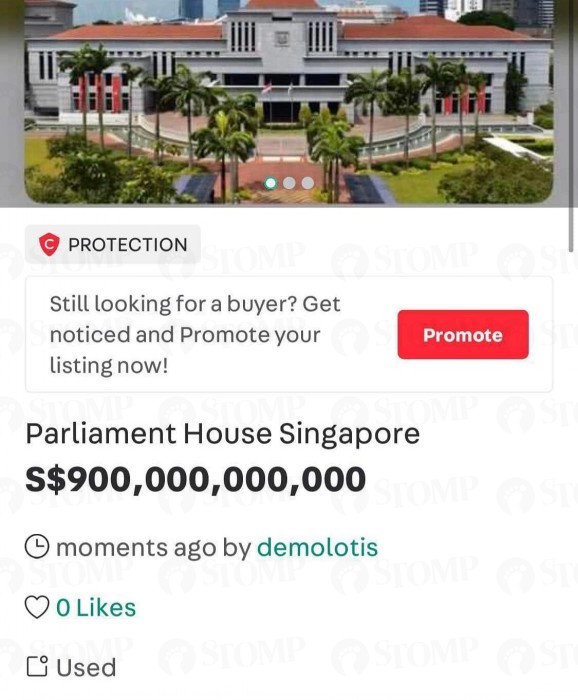 There were even listings of Prime Minister Lee Hsien Loong and other Singapore politicians.

There were also many listings of different malls and buildings in Singapore, one of which was of Jewel Changi Airport, with its price tag at a whooping $8 million.

But the description was the best part: "Selling Singapore Jewel Airport. Used for a few months, bought $10,000,000. Can nego but not too much." 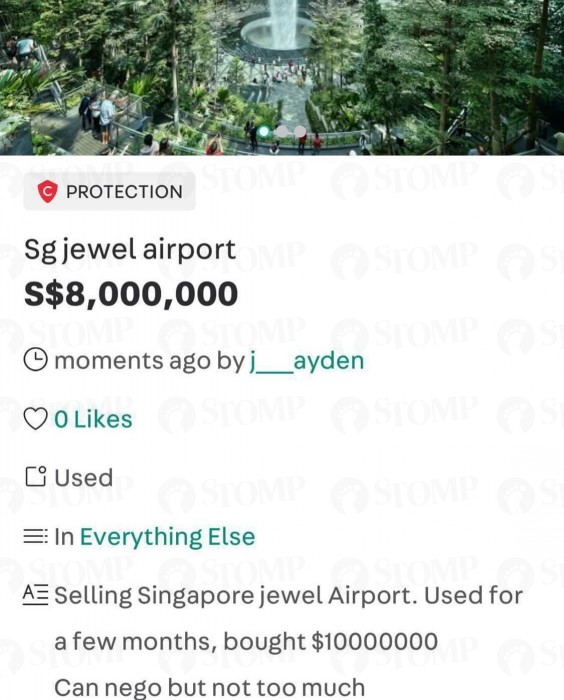 Another listing was for Jurong East MRT station, and the listed price was $50,000.

Once again, the witty caption takes the cake: "Whole MRT for sale, can eat and drink on board if you buy." 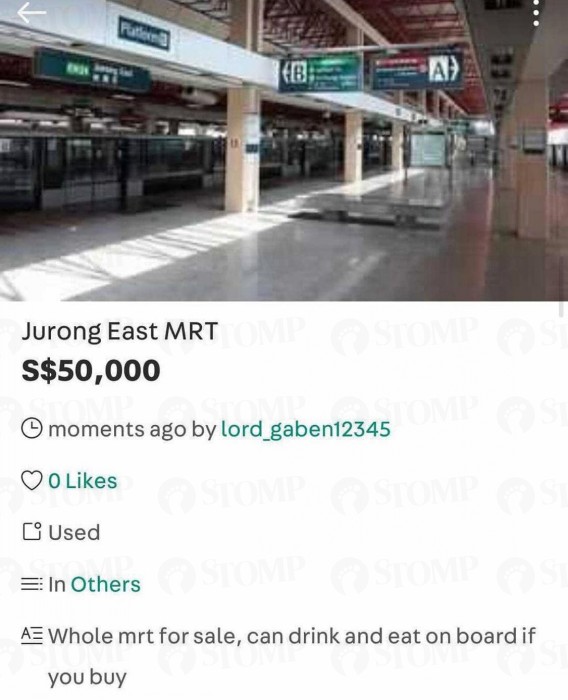 The trend, which seemed to have started by one Carousell user but continued by many others, also saw hotels such as Fullerton Hotel and Marina Bay Sands Hotel being listed for millions of dollars. 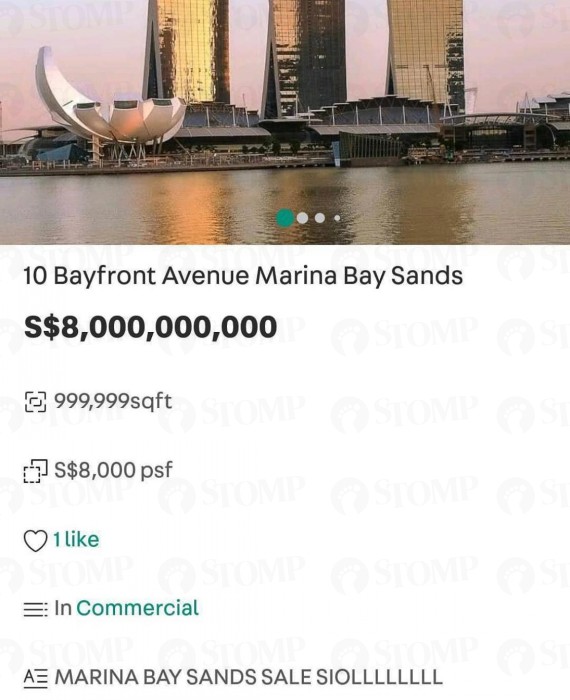 After an influx of such listings, one Carousell user decided to, well, 'sell' the entire Singapore, for $50 million. 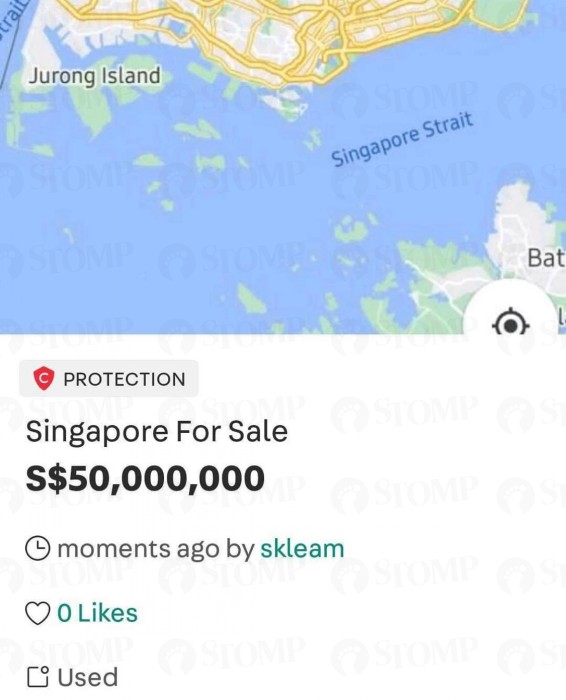 Yu told Stomp he was confused when he saw these screenshots on Instagram at first, but when he switched to the Carousell app and saw that these were actual listings, he was shocked.

"Look at all these people posting and selling weird things on Carousell," Yu said.

"I saw these screenshots on Instagram in mid-December but I think this joke has been around for a while now.

"I actually feel pretty upset with this trend. These people are not only pretending to sell our buildings for crazy prices, but they're involving our politicians in this joke too. That's not right."

In response to a Stomp query, a spokesman for Carousell said: "While we enjoy Singaporeans’ sense of humour, we’d like to take this chance to remind our users that in accordance with our listing rules, such listings are not allowed on our marketplace and have since been taken down."

The Carousell spokesman added that they strictly prohibit any form of listing that involves sale of people. They also do not allow mispriced or fake listings on the platform.

"Carousell employs technology and AI to help us identify mispriced or fake listings, and we are constantly upgrading and improving this. Dedicated teams at Carousell also manually monitor the marketplace, moderate listings and look into reports filed by our community to ensure the quality and safety of our marketplace," said the spokesman.

"We will continue to invest in both automated and manual moderation efforts, to ensure that Carousell is a conducive space for all our users to sell and buy."

Related Stories
Man shocked that adult toys appear when 7-year-old son searches for gun toy on Lazada
Shopper buys $66 'I PID' tablet as Christmas present, shocked to get children's toy
Buyer can tell $348 bag is 'fake at first glance', but seller insists it looks different in every country
More About:
Carousell
funny