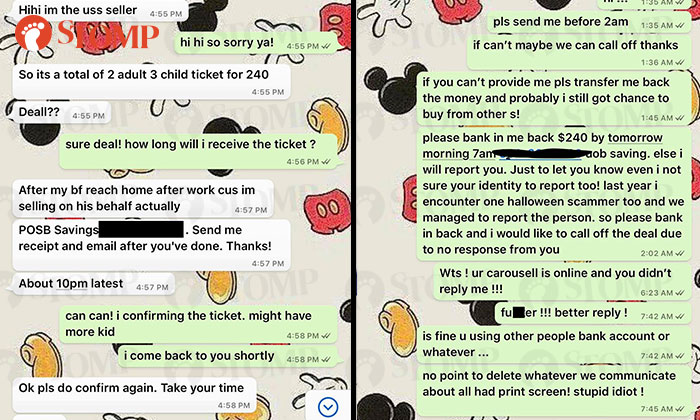 A simple transaction on marketing platform, Carousell, turned into a nightmare for Stomper E after realising that she had been scammed by a seller.

E told Stomp that she came across a Carousell seller who was peddling tickets for Universal Studios Singapore (USS) on June 21.

She contacted the seller via the Carousell app at about 11.22am to purchase some tickets and received a reply at about 1.02pm.

The seller asked her how many tickets she needed. As she could not confirm the number of tickets needed at the time, E only replied at about 4.50pm that she needed two adult tickets and three children tickets.

Based on the seller’s listing, this amounted to $245, a fact that E was quick to point out after the seller quoted her $250 for the tickets.

The seller later revised her prices to $240 instead.

To clarify her doubts, E also asked the seller if the tickets were electronic tickets (E-tickets) or physical ones.

The seller told her that these were E-tickets, and she would send them to E’s email once payment has been confirmed.

The two later continued their conversation on WhatsApp after E passed her contact number to the seller.

“I asked her if we could talk over WhatsApp. I usually get the tickets from someone else but my usual seller was not doing it anymore.

“I felt it was better to talk on WhatsApp because sometimes, I do not get notified when the seller replies me on Carousell.”

The seller later told E that she would only be able to send the tickets later because she was selling them on behalf of her “boyfriend”.

She also provided her saving account number to E and reassured her that the tickets would be sent out by 10pm.

E asked the seller if it would be more convenient to transfer the money to the seller’s boyfriend, and she concurred.

She passed E the numbers to a DBS Autosave Account, which she alleged, belonged to her boyfriend.

Although E suggested using the PayNow app to transfer the money, the seller told her to use internet banking instead as she did not have the app.

E subsequently transferred the money over and messaged the seller a screenshot of the transaction at about 11.11pm.

The seller told her that she would check to see if she received the money and promised to send the tickets once she reached home, which she estimated to be around midnight.

When E reminded her that she needed the tickets urgently as she was planning on going to the USS the next day, the seller even said that she was already on the way home.

E did not hear from her after that. She dropped the seller a message at around 1.21am on WhatsApp and another message on the Carousell app at 1.36am to ask for her tickets.

She gave the seller an ultimatum — to transfer the tickets by 2am, or call off the deal.

E also advised the seller to return the money back to her, or she would report her to Carousell.

Despite her threats, the seller did not reply.

E said that she discovered that the seller was ‘online’ in her Carousell account on the morning of June 22 but did not respond to any of her messages.

She subsequently emailed Carousell about the incident and was told that the seller’s account and been suspended.

E said that Carousell also advised her to make a police report.

She went down to the Sengkang Neighbourhood Police Centre the following Wednesday (June 27) to lodge a police report.

“I tried calling the seller again after that day but could not get through. I suspect she was using a prepaid card.

“I just want to warn others about this person.”

"The police confirm a report was lodged and investigations are ongoing.”

Related Stories
Carousell buyer repeatedly lowballs man, then accuses him of selling fake goods
Police report made after woman pays seller $230 for USS tickets -- that were already used in May
New texts between Carouseller and woman who got $29 refund in coins show there's more to the story
More About:
scam
Carousell