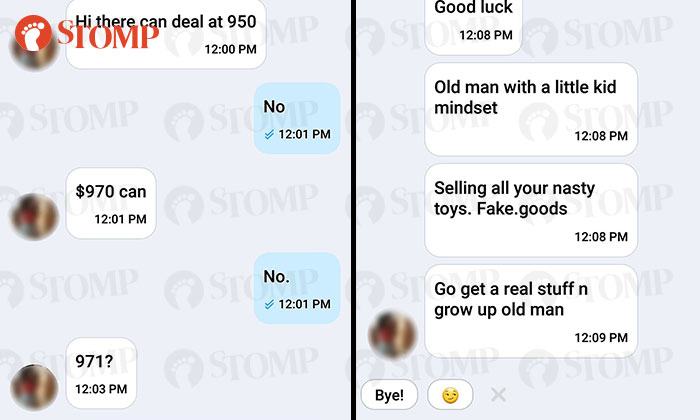 Stomper DDTXOC recently had an infuriating encounter with a female buyer who not only tested his patience through repeated haggling but accused him of selling fake goods when her offers were rejected.

DDTXOC told Stomp in a phone interview that he placed up a listing of a Samsung Galaxy S9+ using his Carousell account on Saturday night (June 23).

He received a message from a buyer at about 12pm on Sunday (June 24).

According to DDTXOC, he and his brother purchased two sets of the Samsung S9+ from a Samsung retail store.

They later realised that they could have gotten the phones via renewing their contracts with the respective telcos instead.

The two brothers thus decided to sell the phones they bought.

Although DDTXOC stated listed the selling price of his phone at $1,288, the buyer asked him if she could get it at $950.

When DDTXOC rejected her offer, she increased her offer to $970, which was once again rejected by DDTXOC.

Frustrated by her behaviour, DDTXOC told her off.

Said DDTXOC: "I’m sorry but I just exploded. At that time, my girlfriend was beside me and she was worried because my face was all red.

"She said that I looked like I was having a heart attack.

"Just because we sell things online, that does not make us desperate or beggars. It was just too much.”

The buyer then increased her offer to $971.50, citing that she was paying the additional 50 cents for DDTXOC’s "poor attitude".

Ironically, she also threatened to take screenshots of their conversation and send them to Stomp.

DDTXOC responded in kind, saying that he would not sell her the phone even if she offered $1,328 and asked her to "fu** off".

The buyer then accused DDTXOC of having a "little kid’s mindset" and peddling "fake goods".

Said DDTXOC: "I thought I blocked her after her last offer but her messages still came through.

"She said I was childish and have the mind of a little kid.

"She then accused me of selling fake goods. I have been selling toys on Carousell for years now. Reputation is the most important thing here, so I cannot tolerate her actions.

"My personal policy is to always be honest to the buyers. If the product is from a third-party, I will always tell them.

"If I had accepted an offer from buyers and the items they bought ran out of stock, I would personally get the items from other sources, even if I make a loss.

Related Stories
"Cheapo" guy orders $10 bouquet online, asks seller to make it "look big" then cancels 15 min before collection time
New texts between Carouseller and woman who got $29 refund in coins show there's more to the story
Carouseller leaves woman in tears after refunding her $29 in coins: "I wanted to give all 5 cents"
More About:
Carousell
complaint