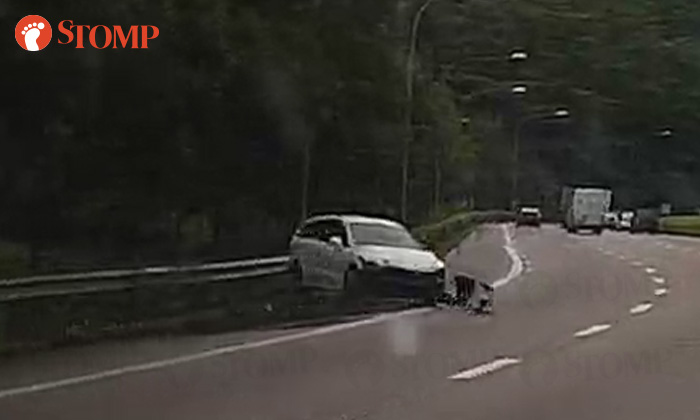 A car skidded on a slip road along the Pan-Island Expressway (PIE) towards Bukit Timah Expressway (BKE), before spinning out of control and crashing into a barrier on Oct 13 at around 7.47am.

Stomper AMG shared with us a video via WhatsApp which was recorded on his father's in-car camera.

The video showed a white car losing control as it was travelling along the centre lane while making a turn on a bend on the slip road.

It then crashed into a road barrier on the left of the road.

The impact dislodged its front bumper.

The car right in front was also seen to have braked just in time in order to avoid being hit by debris from the accident.

"This happened while my father was driving on the slip road towards BKE from PIE," he said.

"Luckily, there were not many cars around at the time.

"It would've been serious if there were more cars around."

Related Stories
'Stationary' car in middle of the road suddenly swerves into Stomper's lane along Airport Boulevard
Stomper applies "emergency brake to the max'' to avoid collision with reckless driver
Little boy does everything right when crossing road -- but van driver fails to stop for him
More About:
accident
reckless
close
close shave