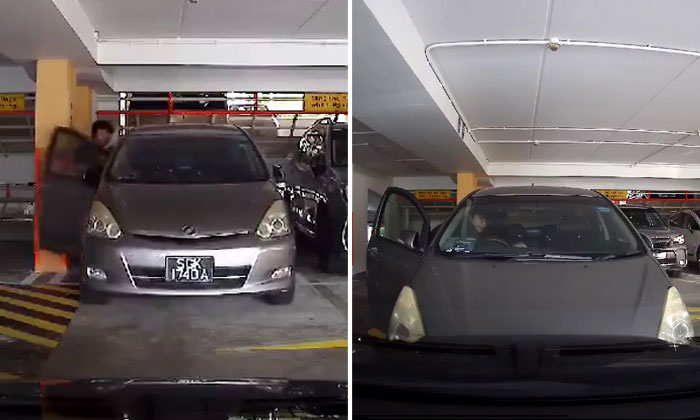 A car was seen rolling out of a lot and crashing into another car after its driver had apparently failed to put it in parking gear and applying his parking brake on Monday (Oct 14).

Videos of the incident were posted on SG Road Vigilante's Facebook group page by Frankie Ongsk.

Frankie said in his post that the incident was a hit-and-run and that he has since made a police report. It is unclear where this happened.

In the first video, the car is seen rolling away while the youth is exiting the vehicle.

The driver's door is still open as it collides into the car with the car-cam.

The guy quickly re-enters the car to reverse it back into the lot.

In the second video that was recorded about a minute later, the youth is seen getting into the car again before driving out of the carpark.

Frankie wrote: "When you hit [someone's] car, you don't just leave the scene."

Earlier this month, a Stomper made a police report after a driverless lorry rammed into his parked car at Old Upper Thomson Road.