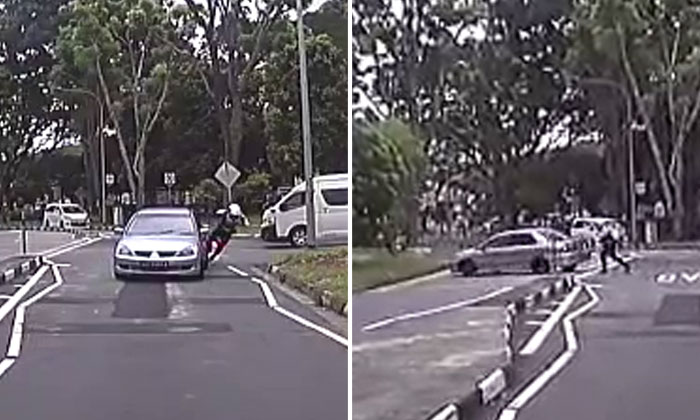 A 37-year-old driver has been detained after a manhunt operation following an incident where he was caught on video reversing into a Traffic Police (TP) officer before speeding off.

Footage of the incident that happened along Geylang East Avenue 1 on Thursday morning (Oct 28) has been circulating on social media.

In response to a Stomp query, the police said at about 9.50am, TP officers were patrolling the vicinity of Upper Paya Lebar Road when they signalled for a driver to stop his car along the roadside to conduct a check.

Instead, the driver sped off.

The officers gave chase and the pursuit came to a halt when a TP officer moved forward and managed to stop the vehicle.

However, the vehicle suddenly reversed and allegedly hit onto another TP officer who was positioned behind the said vehicle before speeding off.

The officer sustained minor injuries and declined to be taken to hospital.

"A 34-year-old male passenger was detained and arrested for using criminal force against a public servant and suspected drug-related offences, while the driver had fled on foot," a police spokesman said.

"The 37-year-old male driver was subsequently detained after a manhunt operation."