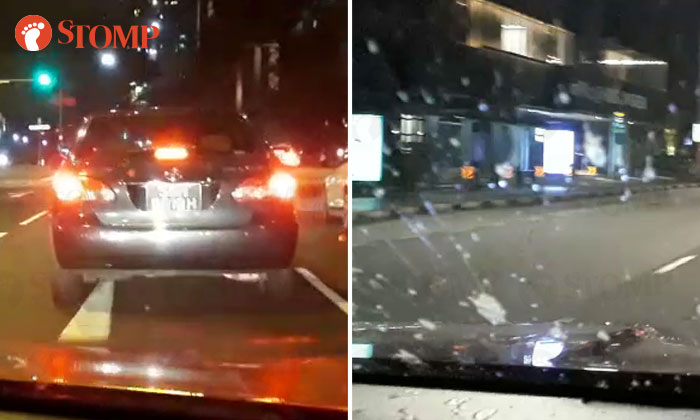 A taxi driver had an egg thrown at his windscreen after he sounded his horn at a driver who had cut into his lane and started swerving in and out of it from Havelock Road towards Pickering Street on Sunday evening (Apr 21).

Stomper Peter alerted Stomp to the incident and shared a video recorded on his in-car camera.

He had two passengers seated in his back seat when a black Toyota car with licence plate number SBN8818H suddenly cut into his lane.

"No collision happened, however, I sounded my horn to warn him of the danger imposed to my passenger and I," said Peter.

"After the driver cut into my lane, he started swerving in and out of the lane in front of me.

"As such, I sounded my horn again continuously.

"The driver then slowed down till his vehicle was on my right before the passenger threw an egg that hit the front windscreen of my taxi."

Peter said he quickly switched on his wiper to clean the screen.

After that, the two drivers went separate ways and Peter did not see the Toyota again.

He has since made a police report regarding the incident.