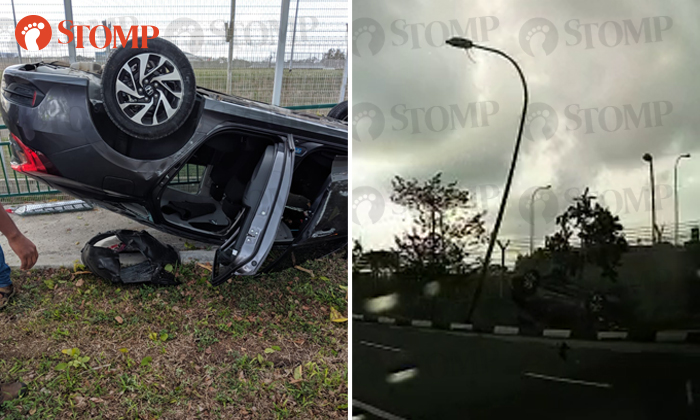 A 32-year-old man was taken to hospital after his car overturned in an accident along Nicoll Drive on Friday morning (Oct 4).

Responding to a Stomp query, the police said they were alerted to the accident at 8am.

Stomper Marcus and his wife were travelling in their car when they witnessed the crash, which was also captured on his dashboard camera.

Marcus said: "The car was coming round the bend when it hit a tree and then a lamppost, which resulted in it flipping on its roof.

"I stopped my car to assess the situation. My wife and I also helped to call the police and ambulance.

"The driver had a big bump on his head but other than that, he seemed fine."

In several photos that Marcus shared with Stomp, a few passers-by can be seen rendering their assistance at the scene.

The car driver was conscious when taken to Changi General Hospital, a police spokesman told Stomp.