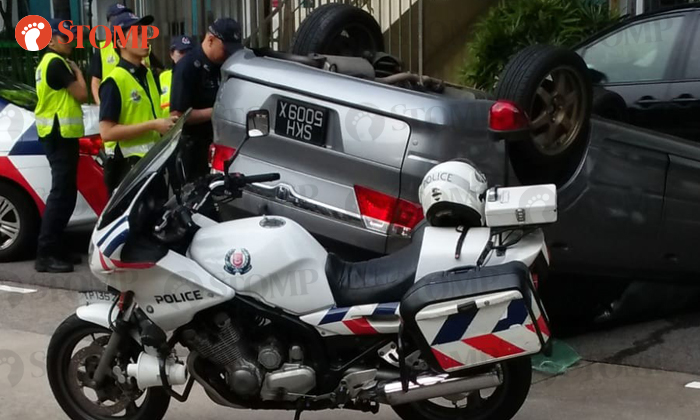 A silver car SKH5009X overturned after an accident along Rivervale Drive towards Punggol Road at about 5.06pm on Monday (July 9).

Stomper Paul was on his way home from Rivervale Plaza when he spotted several police vehicles and officers from afar as he was approaching the Kangkar LRT station.

He told Stomp in a phone interview: "I thought that it was a robbery or something. I went closer and saw a traffic police motorbike and an overturned car.

"Then I realised it was an accident."

Intrigued, Paul went on a connecting bridge between the LRT station and Block 117C Rivervale Drive to take a look.

He realised that there were skid marks on the road.

Said Paul: "I wasn’t the only one who went to take a look. Another man beside me asked me how the car could have overturned.

"I told him I wasn’t sure. I have lived here for 18 years and this is the first time I’ve seen an accident here.

"Normally drivers would not speed on this stretch of road because it is a one-way traffic flow, and there are bus lanes and bus stops around here so it can be dangerous.

"I think the driver could have been avoiding something on the road and lost control, causing the vehicle to skid. There were skid marks all over the road." 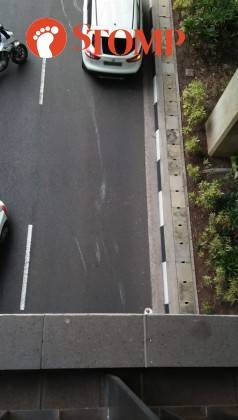 Facebook user Maria Jaafar also posted a video on the incident on her page.

The video shows police officers, as well as an ambulance near the overturned vehicle. The driver of the car is nowhere to be seen.

In response to a Stomp query, a police spokesman said: "On July 9, 2018, at 5.06pm, the police were alerted to an accident involving a car along Rivervale Drive towards Punggol Road.

The Singapore Civil Force (SCDF) said it was alerted to the incident at 5.15pm.

However, Stomp understands that no one was conveyed to hospital by the SCDF.

Related Stories
Fatal BKE accident: Video shows Merc flipping over after crashing into Lancer
Motorcyclist who had hand severed in accident with taxi gets limb re-attached
Car skids and hits wall along KJE, no injuries reported
More About:
accident
skid