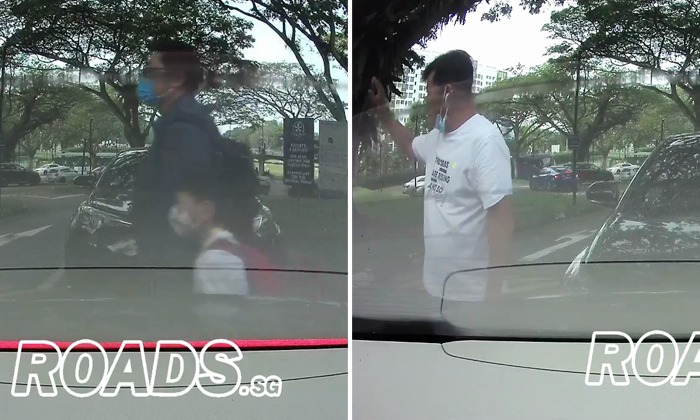 A man and a young boy narrowly avoided being crushed between a stationary vehicle and a car that suddenly accelerated.

Facebook page Roads.sg posted a video of the pair's lucky escape and said it occurred on the evening of September 10, at around 6.10pm.

In the video, a man can be seen crossing the road with a young boy when a black car suddenly surges forward and hits a stationary vehicle.

A woman in the stationary vehicle is heard expressing shock at the impact.

According to the video caption, the car had accelerated by accident.

It also said that the two pedestrians would have been crushed in the collision if they had been two seconds slower, adding: "Father and son must thank their guardian angels for keeping them safe."

The driver of accelerating car can be seen exiting his vehicle after the collision and raising his hand in apology.

Roads.sg's post on Friday (Sep 17) has garnered over 1,000 shares to date, with many netizens criticising the driver.

Related Stories
New driver 'traumatised' after cyclist appears from blind spot and dashes across road
Woman has close shave with car after exiting Audi in the middle of Jalan Kembangan
Driver chides 'oblivious' mum who crossed road recklessly with 2 kids: 'They could have died'
More About:
near-miss
near-accident
pedestrian