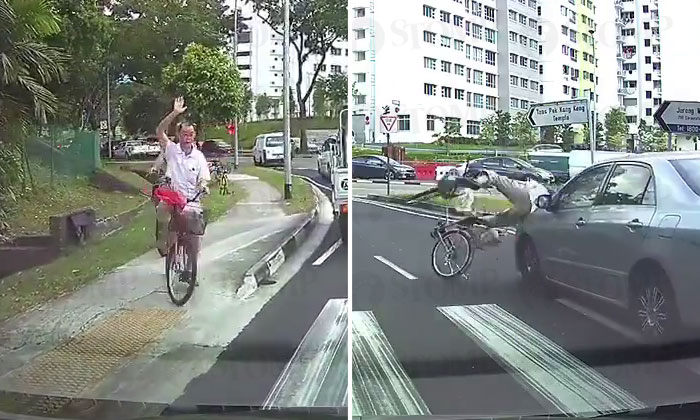 A 67-year-old man was taken to hospital after getting hit by a car as he was cycling across a zebra crossing along Jurong West Avenue 2 on Feb 13.

In response to Stomp's media queries, the police said that they were alerted to the accident at 5.49pm.

The cyclist was taken conscious to National University Hospital.

A netizen who identified himself to be the cyclist's son, Mr Tham Yiep Soon, wrote a Facebook post on the evening of the accident asking for video footage of the accident from any witness.

The clip was posted in the comments section of the post but has since been deleted.

"In the video my dad has clearly raised his hand to signal his intention to cross the road. The car which captured the accident stopped and gave way to him," he wrote.

"My priority now is to have my dad recover well as he is in ICU (intensive care unit) now."

In the video, Mr Tham's father is seen raising his hand before cycling across the zebra crossing.

As he is cycling across, the driver of a silver Toyota does not stop at the zebra crossing and hits the cyclist, knocking him and his bicycle to the road.

Although the driver is in the wrong, this incident serves as a reminder to cyclists to dismount from their bicycles before crossing the road to give them time to look out for oncoming vehicles.

According to the Traffic Police (TP) and Land Transport Authority (LTA), cyclists are advised to always dismount from their bicycles and to ensure it is safe before crossing the road.