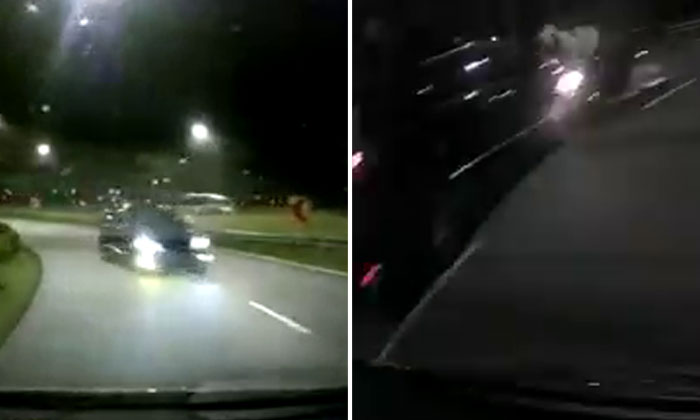 The police are investigating an incident where a car went against traffic, hit a motorcycle and apparently left the scene along a Buki Timah Expressway (BKE) slip road into Bukit Panjang Road on Sept 30.

The police told Stomp the 31-year-old motorcyclist was taken conscious to the hospital.

They were alerted to the accident at about 3.40am.

Facebook user Michael Ong shared videos in a Facebook group of the car going against traffic and knocking down the oncoming motorcycle.

In one of the clips, the car is seen reversing and driving away from the scene of the accident -- this time, in the right direction.

Related Stories
Driver causes near-accident by cutting in front of car from road shoulder along Mandai Avenue
BMW driver goes against traffic flow at Clementi Avenue 4 'as if he owns the road'
Rider taken to hospital after car pushes another car in front of van, causing motorcycle to rear-end it
More About:
dangerous driving
going against traffic
car
motorcycle
CTE