Car driver dies after running red light and crashing into side of bus in Yishun, 7 passengers injured 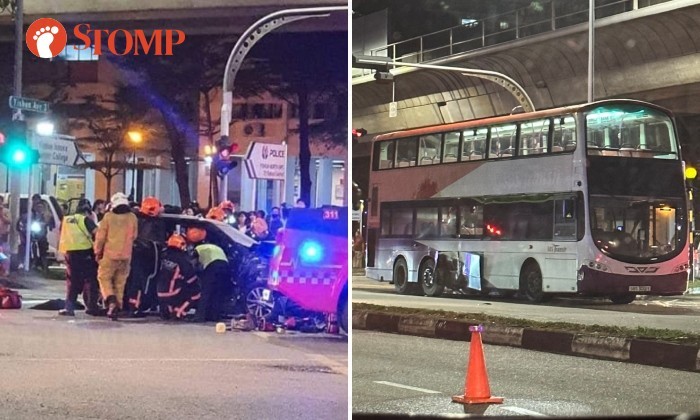 A GetGo car was caught on dash cam video running a red light and crashing into the side of a bus at full speed at a traffic junction in Yishun on Friday night (Jan 13).

The driver of the black SsangYong Tivoli was taken to hospital where he later died. Seven bus passengers were also injured.

Videos shared by Stompers and other netizens showed police and the Singapore Civil Defence Force (SCDF) at the scene.

"I was passing by and saw a lot of sirens. I thought there was a police road block," said Stomper Kohji. "But when I got nearer, I saw the accident."

"The door of the car and the steering wheel were missing. No airbag was seen activated at the driver's seat. The front of the car was totally gone."

Stomper Mike said: "The black car drove non-stop into the bus. Luckily, the bus was a big vehicle. If the car drove into another car or pedestrians, there would have been more casualties.

"Drivers driving cars are similar to holding guns. They are lethal and need to handle the equipment with utmost care."

In response to a Stomp query, SCDF said it was alerted to a road traffic accident at the junction of Yishun Avenue 2 and Yishun Central at about 10.55pm.

"A person was found trapped in the driver's seat of a car. SCDF rescued the person using hydraulic rescue equipment," said SCDF.

When contacted by Stomp, police said the 31-year-old male car driver was unconscious when taken to the hospital, where he later died.

"Six bus passengers, aged between 22 and 40, were conscious when conveyed to the hospital," said police, adding that investigations are ongoing.

Mrs Grace Wu, Vice President (Special Grade) of Customer Experience and Communications at SBS Transit, told Stomp that bus service 117 was travelling straight with the green light in its favour at the junction when the bus was suddenly hit in the middle on the right side by a private car.

"Our bus captain was unhurt, but unfortunately seven passengers onboard were injured," said Mrs Wu.

"We are already in touch with six of them, who received outpatient treatment at the hospital, to extend our care and concern and render assistance as best we can. We are still trying to get in touch with the last passenger. Meanwhile, we wish them a speedy recovery."