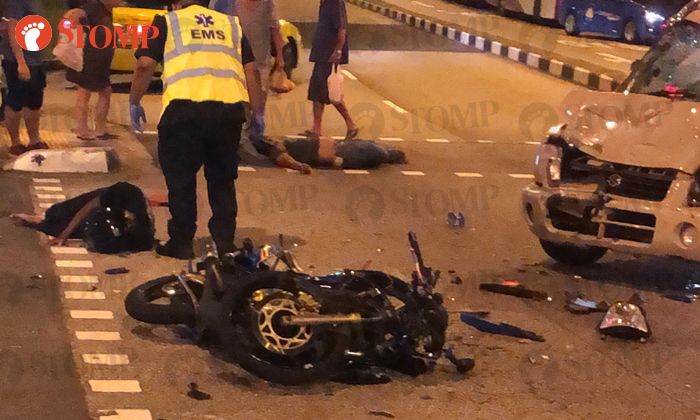 A motorcyclist and his male pillion rider were injured in an accident with a car in Bedok on Wednesday night (Jan 9).

"The motorcyclist, a 22-year-old man, and his pillion rider, a 28-year-old man, were conscious when taken to Changi General Hospital," a police spokesman told Stomp.

Stomp understands that one of the victims suffered head and spinal injuries.

The 49-year-old male car driver was arrested for causing grievous hurt by a negligent act.

Stomp understands that he had made an abrupt right turn at the aforementioned junction and collided head-on with the motorcycle.

Stomper Eddy said he was crossing the road at around 10.30pm when he witnessed the accident.

He recounted: "The motorcycle was going straight when the car made a right turn, not noticing the motorcycle in the opposite direction. The two vehicles had a head-on collision.

"I saw the pillion rider getting flung forward before landing on the road. His helmet also flew out and he seemed badly injured.

According to Eddy, a Singapore Civil Defence Force (SCDF) ambulance happened to be at the scene and stopped to render assistance.

He added: "Don't know whether to say it's lucky or not, but there was an ambulance travelling behind the car before the crash. It was supposed to attend to another call but quickly stepped in to help with the accident."