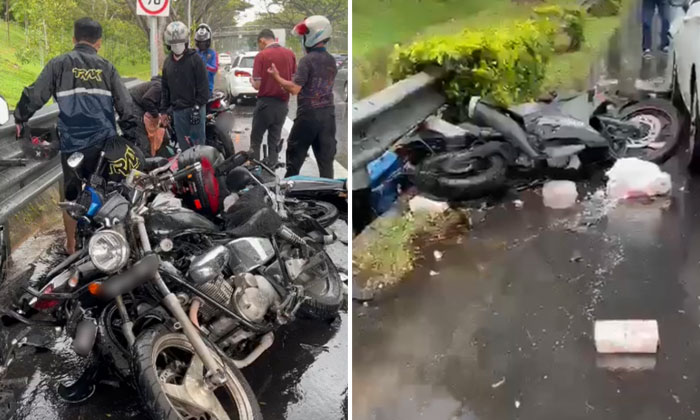 Responding to queries from The Straits Times, police said they were alerted to the accident along the Pan-Island Expressway towards Changi near the Bedok North Flyover at around 3.50pm.

A male motorcyclist, 44, who The Straits Times understands had fallen into a nearby drain, was conscious when taken to Changi General Hospital.

The Singapore Civil Defence Force told The Straits Times that another person was assessed for minor injuries and subsequently refused to be taken to hospital.

A video of the incident circulating on social media shows motorcyclists standing on the wet and slippery expressway next to several motorcycles collapsed onto one another, and a few of them checking on a bare-footed woman sitting on the road.

A short distance away, a motorcycle is seen lying on its side among debris next to a white Opel Astra.

The 44-year-old is then shown lying partially submerged in a drain next to the expressway.