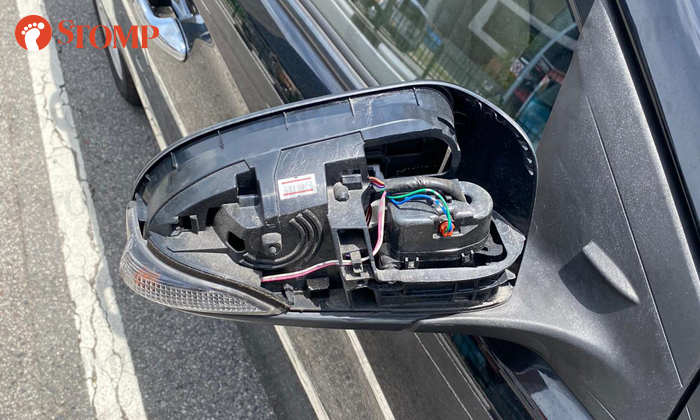 Police are investigating a hit-and-run incident involving a car and a bus along MacPherson Road on Friday afternoon (Nov 4).

Stomper Justin, whose black Toyota Vios was hit by a bus, is appealing for witnesses and those with video footage to come forward.

The incident occurred next to the KL Traditional Chilli Ban Mee shophouse at around 1.30pm.

Justin said: "I was parking my car beside the parallel parking area and waiting for a parking lot with my hazard lights on when an SBS Transit bus drove past me without slowing down and hit my driver side mirror.

"After the impact, I honked at the bus driver several times but he just drove on without slowing down or stopping, as if nothing happened.

"The impact was quite strong and destroyed the casing of my side mirror, and there was also a scratch on my right front bumper."

Justin, who lodged a police report about an hour after the incident, added: "I would like witnesses to come forward if they have video footage as my car's video camera did not capture the incident."

In response to a Stomp query, the police said they were alerted at around 3pm to the case of hit-and-run.

If you have any information about the incident or have video footage, kindly contact Stomp at stomp@sph.com.sg or WhatsApp 9384 3761.