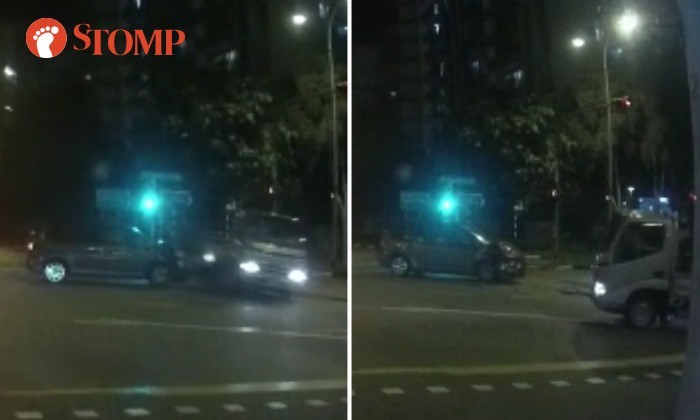 A car crashed into a lorry at the junction of Punggol Field and Punggol East after making a discretionary right turn despite being on a lane meant to only go straight.

Stomper Victor said the accident, which happened on Sunday (Dec 13) at 9.50pm, involved his father who was driving the lorry at the time.

"The footage from the in-car camera was taken from a stranger who just happened to be there during the accident," Victor said.

"My father asked him for the video so he could see what really happened.

"When I saw the video, I was shocked. The car actually turned right, despite being on a lane meant for cars going straight. So my father definitely had the right of way.

"My father told me that after the collision, he came out of his lorry to check on the damage. I'm glad he was not hurt.

"The car driver came out of his car as well, and said he was not injured."

Victor shared that his friend's brother stays nearby and managed to take videos of the aftermath of the accident from his unit.

"According to my dad, there was some oil spill on the road due to the accident and my friend's brother managed to capture footage of Singapore Civil Defence (SCDF) officers cleaning up the oil," Victor added.

"I honestly feel that the car driver shouldn't have driven so dangerously. An accident happened all because he wanted to save a few seconds.

"I'm thankful that there was about 300kg of load in my father's lorry, because if the lorry was empty, it might have flipped over.

"The lorry was actually really badly damaged. But in the end, I'm just happy my father is okay."