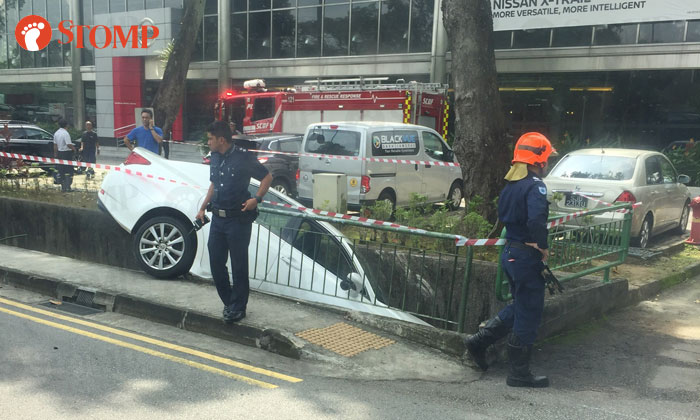 A  woman in her 60s was sent to the National University Hospital (NUH) after a car crashed into a drain along Bukit Timah Road today (Dec 13) at around 11am.

Stomper Ike was passing by when he saw the white car in a drain in front of a Nissan showroom.

The Stomper saw that the area had been cordoned off and police and Singapore Civil Defence Force (SCDF) officers were at the scene.

A police spokesman told Stomp that they were alerted to the accident at 10.59am.

"The car driver, a 67-year-old woman was conscious when conveyed to NUH," he said. "Police investigations are ongoing."

In response to Stomp media queries, an SCDF spokesman said:

"SCDF was alerted to a road traffic accident at 11am along Bukit Timah Road.

"A woman in her 60s was conveyed to NUH.

"The hospital was alerted to be on standby to receive the patient."

This is not the first incident of a car crashing into a drain along Bukit Timah Road.

On Nov 7, a BMW had crashed into a drain after hitting a pedestrian.