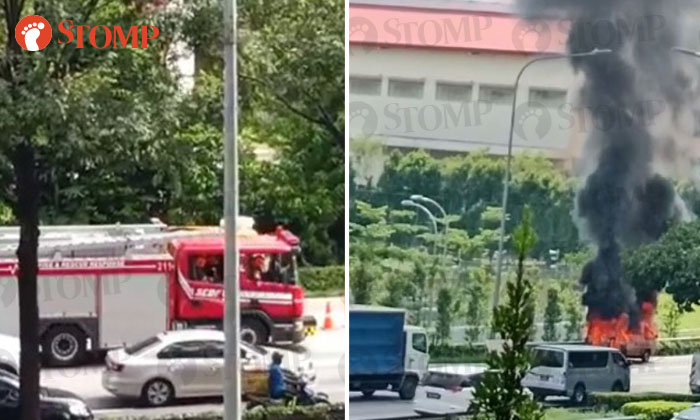 A van caught fire along the Central Expressway (CTE) towards the Ayer Rajah Expressway (AYE) yesterday (Dec 17) at about 2.15pm.

Stompers Ivan and Clarice alerted Stomp to the incident by sending in videos they captured.

Ivan was in his car travelling along the expressway when he caught sight of thick white smoke rising up into the air.

Clarice captured several videos from her flat, which overlooks the expressway.

Clarice said: "I was in the living room with my sister and smelled something quite horrible.

"At first, we thought it was the monthly spraying of mosquito repellent by the estate.

"When we were just about to close the door, we saw smoke coming from a vehicle along the CTE.

"We were so shocked by the fumes and to our horror, a van was on fire."

She told Stomp that she was afraid the van might explode.

In one of the videos she sent, you can hear her saying in Mandarin that she was scared the van might explode and that the explosion would affect her home.

Before the fire broke out, Clarice said she saw passengers running out of the van.

About 10 to 15 minutes later, she said the Singapore Civil Defence Force (SCDF) arrived at the scene.

In the video below, sirens of the oncoming Red Rhino can be heard blaring loudly.

The Red Rhino comes to a stop just in front of the burning van.

In response to a Stomp query, the SCDF said: "SCDF responded to a fire along the CTE towards AYE before the Balestier Road exit.

"The fire involved a van and was extinguished by SCDF using one compressed air foam backpack and one hose reel jet."

In another video she sent, SCDF officers can be seen using a water jet to put out the fire.

Safety cones have also been set up to cordon off two of the four lanes along the expressway.

"It was the first time my sister and I have seen a fire scene in person, it felt like a drama scene," Clarice added.