Car catches fire at Causeway towards Johor Bahru: 'It was a heavy jam' 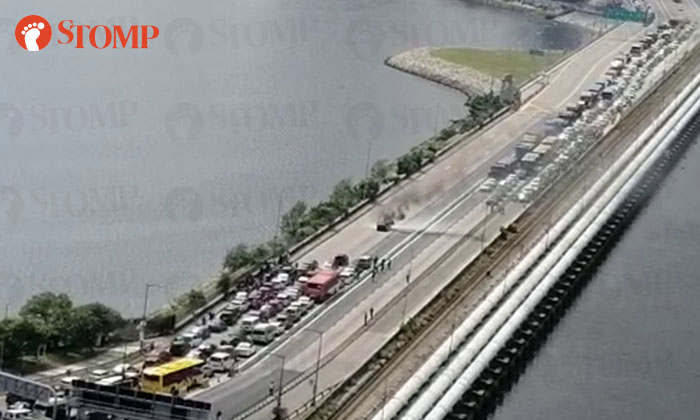 Stomper Ivan was at his friend's house in Marsiling when he looked out a window and noticed a car that was on fire along the Causeway.

He shared with Stomp a video of what he saw on Saturday (July 27) at about 3.25pm, from Block 215 Marsiling Crescent.

A video of the incident was also published on a Facebook page, SG Road Vigilante.

Another video was also posted on a Facebook page, PHV Customer Service.

In the video, a car can be seen on the road as three lanes of vehicles have stopped a distance behind it.

Black smoke can be seen emitting from the car.

More vehicles that are coming from the opposite have also stopped due to the car that was on fire.

Ivan told Stomp: "It was such a heavy jam."

Responding to a Stomp query, the Singapore Civil Defence Force (SCDF) said: "At about 3.05pm, the SCDF responded to a vehicle fire at the Causeway after Departure Immigration at Woodlands Checkpoint.

"The fire involved the engine compartment of a car and was extinguished by SCDF using a water jet.