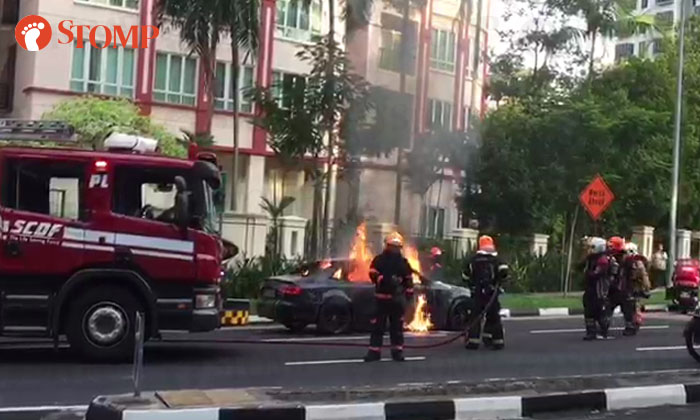 A vehicle fire broke out along Killiney Road at about 6pm on Thursday (Sep 13).

Stomper David was walking past the area at about 6.30pm when he witnessed the incident.

In a video taken by him, a black car parked by the roadside is seen engulfed in flames accompanied with black smoke, before it was extinguished by the Singapore Civil Defence Force (SCDF).

Two fire engines are also seen at the scene.

David said: "I didn't see how the fire started, it was already like that when I passed by.

"No one seems to be inside the car because I didn't see the SCDF extracting anyone from it, and I didn't see an ambulance as well."

Another Stomper had also taken a photo of the fire as her car was stopped at a traffic junction.

In response to a Stomp query, SCDF said that it had responded to a vehicle fire incident along Killiney Road at about 6.15pm on Thursday.

The fire was extinguished by SCDF using a water jet and two compressed air foam backpacks.