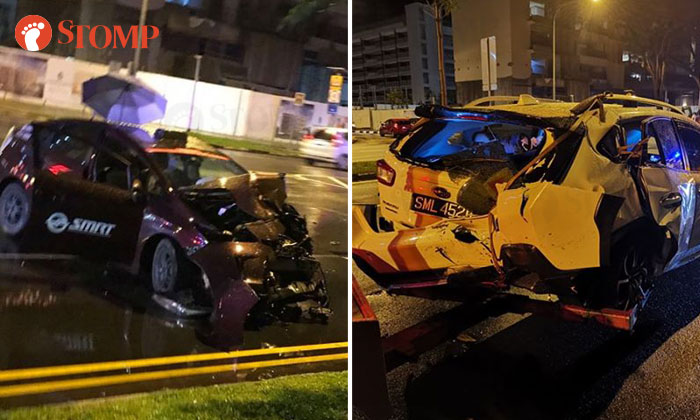 Two men and a woman were taken to hospital after an accident involving a car and two taxis occurred at the junction of Ang Mo Kio Street 23 and Ang Mo Kio Avenue 3 on Nov 29.

Stomper Jiang Tian, who is one of the victims, alerted Stomp to the incident.

She told Stomp that her husband was driving the car in which she and her two-and-a-half-year-old son were passengers. Her son was seated in a child seat and she was seated next to him in the back seat.

She shared that her husband was stationary at the T-junction waiting to turn right to Ang Mo Kio Street 23 when he was hit from the rear.

When he came to, he discovered that his vehicle was on the other side of the lane. They do not know how the accident happened.

Jiang Tian said she and her husband were taken to Tan Tock Seng Hospital and their son was taken to KK Women's and Children's Hospital.

"We suffered minor head and neck injuries," she added.

In response to a Stomp query, the police said they were alerted to the accident at about 7.38pm.

"Two men and a woman, aged 32 to 40, were conveyed conscious to Tan Tock Seng Hospital," a police spokesman said.

Jiang Tian is appealing for witnesses of the accident.

If you saw what happened or have any footage that can help, kindly contact Stomp at stomp@stomp.com.sg or WhatsApp 9384 3761.