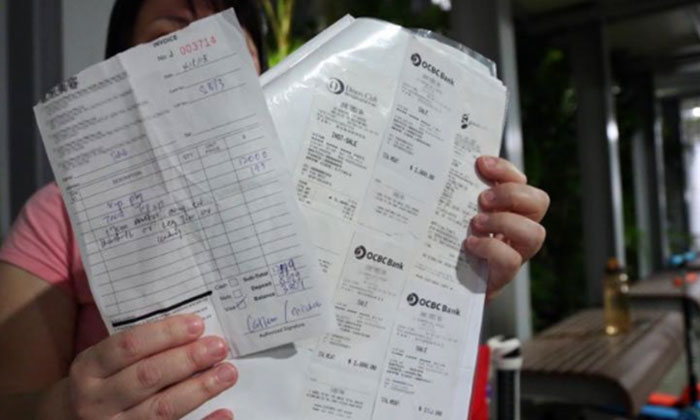 A woman with advanced thyroid cancer said that she originally intended to spend $38 on a session of massage to ease her body pains, but was duped into buying a $12,000 package by a masseuse who reportedly told her that she could be ‘cured’, losing $8,335 in the process.

According to Ms Bai, 37, the masseuse apparently charged a deposit for the package to her credit cards without telling her the cost beforehand and refused to do a refund for her later.

Even worse, Ms Bai said that she had to go to a hospital for treatment after breaking out in a rash upon using an ointment prescribed by the masseuse.

Ms Bai who suffers from thyroid cancer told Lianhe Wanbao she came across an outlet of a well-known massage parlour chain at Seletar Mall in Sengkang in April this year.

At the time, there was an ongoing promotion, and a single session cost only $38.

Ms Bai, whose body was aching due to her condition, decided to go for a session.

“During the massage, the masseuse came to know that I was suffering from late-stage cancer, and recommended me to try a special treatment.

“She told that it would cure me.”

Ms Bai had been diagnosed with thyroid cancer six months ago, but her condition worsened in the recent months, progressing to late-stage cancer.

The doctors told her that her days were numbered, and asked her to prepare for the worst.

When the masseuse reportedly told her that she would be able to cure her, Ms Bai immediately forked out another $199 to give the treatment a try.

“She just took an ointment and applied it on my body, before proceeding with the massage.”

Ms Bai said that the masseuse later took advantage of her vulnerability and convinced her to purchase a package.

She subsequently passed her credit cards to the masseuse when she told her that she first needed to place a deposit.

“I never asked her how much the deposit was.

“However, she took two of my credit cards and told me that the payment could not be processed.

"I passed her another.

“On the third card, she suddenly said that the payment went through, and the sum was $8,335.

“I was shocked, and wanted her to do a refund, but she refused.

“I contacted the bank but was told that it was too late.”

Ms Bai blamed the incident on her bad luck and went home.

Later that night, she used the ointment prescribed by the masseuse but broke out in rashes, and had to go to a hospital.

“The doctor said that my rashes were probably due to the ointment, and told me that I shouldn’t have been so gullible.

“I took my medical slip and went back to the parlour to ask for a refund.”

Reporters contacted the parlour for more information and a spokesman said that Ms Bai accusations were ‘baseless’.

“The customer was already unwell before she came to us, and insisted on going through with the massage session despite feeling unwell.

“She later praised our masseuse's skills and asked to sign up for a package.”

As for Ms Bai’s allegations that the masseuse told her that she was able to cure her cancer, the spokesman said that was a lie fabricated by Ms Bai.

The spokesman revealed that the masseuse had been so spooked by the incident that she has since resigned, and the parlour has issued a full refund to Ms Bai out of goodwill.

However, when reporters spoke to Ms Bai later, she said that she did not receive any notice of the refund.

Related Stories
Wife with stage four cancer dies on first wedding anniversary, leaving doting husband shattered
Cancer patient, 8, suffers relapse and asks mum:"Why not kill me and give birth to me again?"
My Fight With Cancer: I was diagnosed with stage 2 breast cancer -- when 5 months pregnant
More About:
massage
cancer
complaint