Canadian who robbed StanChart bank in Singapore gets 5 years' jail, may not be caned 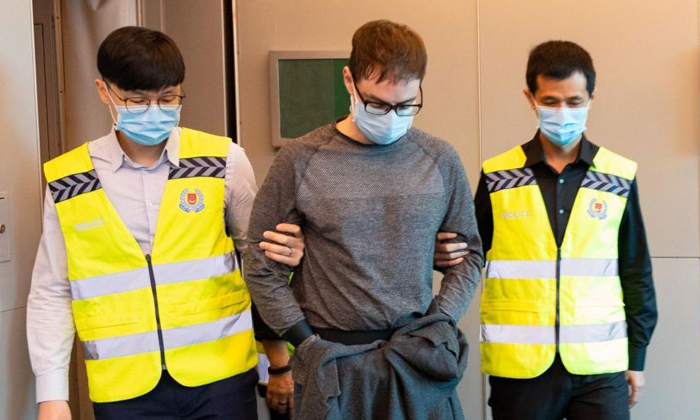 A Canadian man who escaped with more than $30,000 after robbing a Standard Chartered Bank branch in Holland Avenue on July 7, 2016, was sentenced to five years' jail and six strokes of the cane on Wednesday (July 7).

However, he may not be caned as the Singapore Government had assured Britain that any corporal sentence would not be carried out in order to secure his extradition, and said last night it was working through the necessary procedures to fulfil this assurance.

David James Roach, now 31, who fled Singapore soon after the robbery, had earlier pleaded guilty to one count each of robbery and moving his criminal gains out of Singapore.

Roach's lawyer Anand Nalachandran asked for a lighter sentence, stressing that his client was not armed with a gun during the robbery.

Judge Tan, who said Roach had committed "daylight robbery" in a "brazen" manner, sentenced Roach to five years' jail and six strokes of the cane.

The court heard that Roach arrived in Singapore on a social visit pass on June 29, 2016 and he went on to stay at different hostels in the Chinatown area.

He then planned the heist and carried it out on July 7 that year.

Roach had approached the bank cashier during the robbery with his right hand in a bag that he placed on the counter.

His action, coupled with a handwritten note with the words, "This is a robbery, I have a gun in my bag", caused the cashier, who was pregnant, to fear for her life and she complied with his instructions on the note.

According to previous reports, Roach took a flight out of Changi Airport a few hours after the robbery. He was tracked via security footage and DNA from the room where he was staying. A bank ticket stub revealed his identity.

Roach's conviction brings to a close a long saga during which he ended up behind bars in Thailand and was later detained in Britain, where he fought a legal battle in a bid to escape extradition to Singapore.

In a previous joint statement, the Attorney-General's Chambers (AGC) and Singapore Police Force (SPF) said that Roach was arrested in Thailand later in July, 2016.

He was then sentenced to 14 months' jail in Thailand for violating money laundering and other Thai Customs laws.

After he was deported from Thailand on Jan 11, 2018, Roach was detained in London, at Singapore's request, while en route to Canada.

The Thai government had earlier rejected Singapore's request to extradite Roach as the two countries did not have an extradition treaty in place.

Roach was extradited to Singapore from Britain in March last year and charged in court with robbery and money laundering.

He was finally charged in Singapore on March 17 last year.

The Straits Times had earlier reported that Roach will not be caned.

The AGC and Singapore's Ministry of Home Affairs (MHA) said in a joint statement on Wednesday evening that as part of the extradition proceedings, the Singapore Government undertook to the United Kingdom (UK) government that any sentence of corporal punishment imposed by a Singapore court on Roach for the offences for which he was extradited would not be carried out.

This is because the UK’s extradition laws would prohibit the extradition of Roach to Singapore in the absence of such an assurance.

The two Singapore agencies added: "This assurance given to the UK is in recognition of the differing views that countries have on corporal punishment and does not affect Singapore’s long-held view that such punishment does not constitute torture, or cruel, inhuman or degrading treatment or punishment, or contravene international law.

"The assurance was given solely to secure Roach’s extradition to Singapore to face justice for his crimes. The Singapore Government will do whatever is necessary and permissible within our legal framework to seek justice against those who commit crimes in Singapore."

The AGC and the MHA also said that the Singapore Government is working through the necessary procedures to fulfil the assurance given to the UK government.

Roach has made no restitution.