Cabby whose taxi got rammed into by 'wrecking ball' car at Bukit Batok: "I almost wanted to faint" 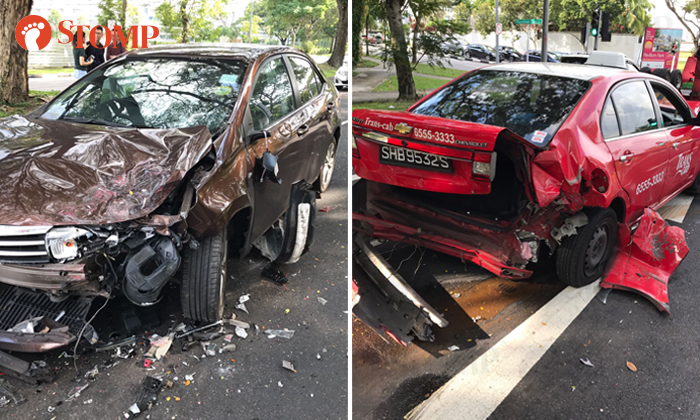 The cabby whose taxi was rammed into by a car after he had stopped for a red light in Bukit Batok on Sep 23 has shared with Stomp his side of the story.

According to taxi driver Stomper Dean, the accident took place at the junction of Bukit Batok Road and Pavilion Circle at around 7.20am.

It was earlier reported by Stomp that the car had "come in like a wrecking ball", even though other motorists had started slowing down and eventually stopped for the red light.

Facebook user Zhi Teng, who posted a video of the incident, alleged that the car driver was travelling at 140km/h.

Zhi Teng's car suffered a dent after getting knocked into by the car, but Dean's taxi took the brunt of the impact and was left mangled.

In a phone interview with Stomp, Dean recounted what happened: "I never noticed the car or realised that it was coming [towards me] so quickly.

"When the car hit my taxi, all my things flew and I thought, 'What is happening?'

The TransCab driver described feeling shocked and said he feared for his life.

He added: "I almost wanted to faint because of the impact.

"I couldn't exit my taxi from the driver's side door and had to climb out through the passenger's side."

Dean, whose back, both shoulders and arms were left aching following the crash, said he is currently on seven days of medical leave.

"The impact was directly from my back," he said.

"Luckily, my diesel tank did not leak.

"I'm not sure what will happen now as my company said repairs for the taxi will cost more than $100,000 but I think they are handling the insurance part. So scary."

Related Stories
Car comes in like a wrecking ball and rams into taxi that stopped for red light
Ah speed some more, lah! Biker scrapes wall after speeding in tunnel
Hot topic of the week: Arrested: 'Psycho' Suzuki driver who came in like a wrecking ball into rear of car
More About:
speed
speeding
accident
car
taxi
damage
damaged
Bukit Batok