Cabby who hit road divider and caused man to alight on ECP had blacked out: ComfortDelGro 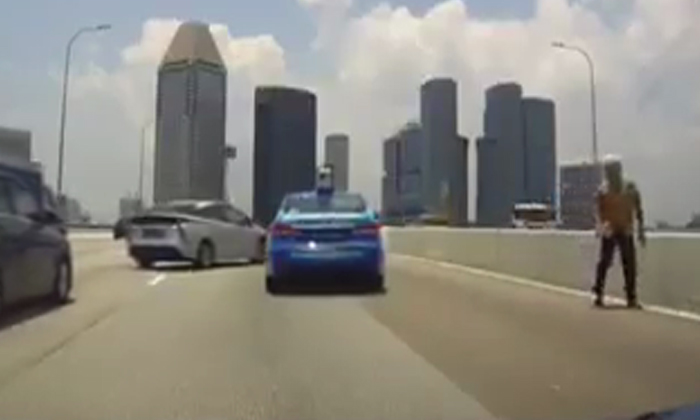 The passenger has given his side of the story.

Read the full update here: Passenger alighted from moving taxi on ECP as he 'was more afraid of being in the cab'

A taxi driver who was caught on camera hitting a road divider twice and causing a passenger to alight on the East Coast Parkway (ECP) had "blacked out momentarily," said ComfortDelGro in an updated statement.

It was earlier reported by Stomp that the police and ComfortDelGro were investigating the incident, which occurred on the Benjamin Sheares Bridge on March 8.

In an updated statement, Ms Tammy Tan, ComfortDelGro's group chief corporate communications officer, said that the cabby had been travelling with a passenger on the ECP when he "blacked out momentarily."

"When he came to, he realised that his passenger had disembarked," Ms Tan told Stomp.

"He proceeded to call for assistance.

"He is currently warded at the hospital for observation.

"We are also in touch with the passenger who was on board the taxi at the time and will be sending a hamper and vouchers to him as a gesture of goodwill.

"We would also like to apologise to all affected motorists for this incident and thank the private car lady driver for her kind assistance."

Related Stories
Police, ComfortDelGro investigating after cabby hits road divider twice and lets man alight on ECP
Passenger alighted from moving taxi on ECP as he 'was more afraid of being in the cab'
More About:
cabby
taxi
reckless driver
reckless driving
ComfortDelgro