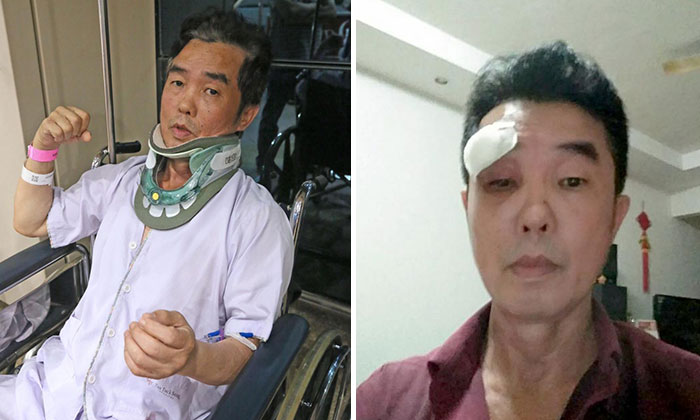 A cabby was not only punched in his eye by a fare evader but also sustained spinal injuries after tripping while chasing his assailant.

The incident happened outside a multi-storey carpark at Block 163A, Gangsa Road on Feb 24, around 2am.

Mr Chen told reporters that a man who appeared to be in his 30s boarded his cab along Orchard Road on the day of the incident.

He stressed that the man did not look drunk at all and was completely sober, adding:

“First, he first wanted me to bring him to Petir Road in Bukit Panjang.

“After I reached the destination, he suddenly told me that he wanted to go to the Kranji Racecourse.

“However, after I arrived at the racecourse, he once again told me that he wanted to go back to Bukit Panjang.”

Mr Chen added that he did not show any signs of unhappiness with the man despite his ludicrous demands.

Just as Mr Chen was turning into the multi-storey carpark at Gangsa Road, he asked his passenger where he would like to alight.

He noted that the fare was more than $30 and the man suddenly shouted at him, “Here! Here!”

“I stopped the car, and he immediately got down and ran. I didn’t just want to let the matter go, so I gave chase.

“I took out my phone to call the police, but the man dashed behind me, tapped my shoulder and then punched me in the right eye.”

Mr Chen said that the man darted off, and he chased after him for about 12 m, before he suddenly tripped, injuring his spine in the process.

“I was too weak to get up. I felt giddy and short of breath.

“I gave up chasing after him and called the police for help.

“The police came down, took my statement and helped me to call for an ambulance.”

Mr Chen revealed that the assault by the man left his right eye so swollen that he could not open it.

In addition, a diagnosis by a specialist indicated that he had spinal fractures and inflammation from the fall.

Mr Chen also said that the doctors told him that he could be paralysed if he had delayed seeking treatment.

As such Mr Chen is appealing for witnesses to step forth so that the man could be brought to justice.

In response to media queries, a police spokesman said that the police were alerted to a case of voluntarily causing hurt at 3.32am on Feb 24.

A man was conscious when conveyed to Ng Teng Fong Hospital, and investigations are ongoing.

Related Stories
Bus captain caught on video hitting motorist with helmet in JB will be disciplined: SBS Transit
New video of Geylang brawl shows clearly group raining blows on man while he was down
Women beaten up and guy gets stomped on during brawl in Geylang, 22-year-old man arrested
More About:
tragic
fare evader
assault
injured
taxi driver