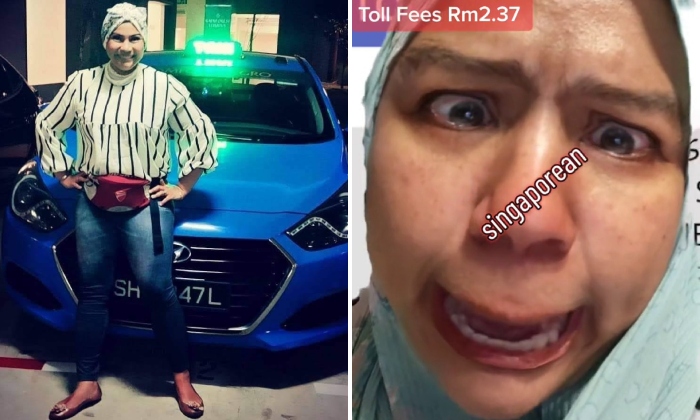 Driving to Malaysia? Perhaps you should watch this video first.

A Singaporean cross-border taxi driver went on TikTok to hilariously rant about fellow Singaporean drivers who don't seem to know how much it costs to enter Malaysia and leave too much gap between cars.

TikTok user CT posted the video on Dec 13 and it has since garnered more than 300,000 views.

She looked like she was crying, but she explained in the comments that she was using a "sad face" filter.

The TikToker started the video with a plea: "Singaporean, you don't make me paiseh (embarrassed). I'm a Singaporean also."

She then recounted an encounter with a Singaporean driver who did not have enough money in their Touch 'n Go card and borrowed her card.

"You go in Johor, school holiday or no school holiday, your this bloody card must have at least RM25," she said, holding up a Touch 'n Go card.

To drive into Johor via the Woodlands Causeway, you need to pay RM20 per entry plus a toll charge of RM2.37, which brings the total to RM22.37.

"Eh, please lah, you borrow my card and you give me S$5 only. Thank you for borrowing the card. You know how much your toll or not?

"Drive big, big car, no money, you know. This one no money," she said, waving the card. 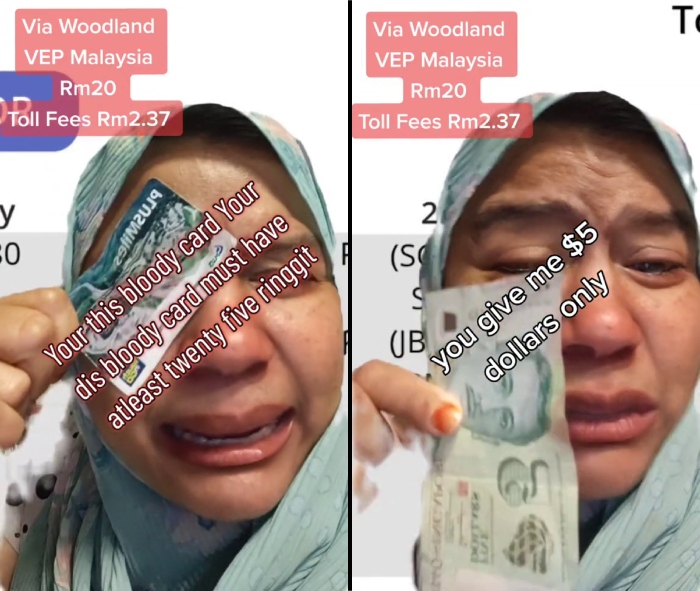 The incident took place on Dec 12 and she said it was not the first time someone driving a "big, big car" had borrowed her card.

When contacted by Stomp, CT said she lent her card to the driver because otherwise the driver would not be able to pass customs and she would be stuck behind the driver.

"As long you don't lend them the card, the gantry will never open. They cannot clear the lane and I cannot give my passport to customs," she told Stomp. "As long you never pay, you cannot clear immigration."

CT, who drives to JB every day, added: "Most of us who drive in and out will try our best to help out."

In the video, the TikToker then went on to rant about another problem with Singapore drivers at the Causeway.

"They love to give gap, a lot of gap," she said, meaning the gap between cars.

And when others drive into the gap, the Singapore drivers would get angry and sound the horn.

CT then recounted an incident with a Maserati driver who left too much gap.

She ended the nearly three-minute video with a reminder to Singaporeans not to "malu (embarrass) people" when they go to Malaysia.

"Don't enter if you don't have money," said the TikToker.