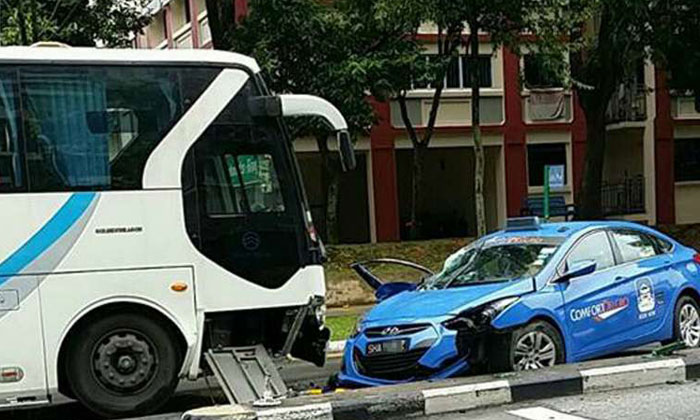 Five people were injured after an accident between a taxi and a private bus in Woodlands on Wednesday (Oct 19) morning.

The accident at the junction of Woodlands Avenue 6 and Woodlands Drive 65 occurred at about 6.30am.

The Singapore Civil Defence Force (SCDF) said that the taxi driver was trapped in the vehicle.

He was extracted by SCDF using hydraulic rescue tools.

Four people were taken to Khoo Teck Puat Hospital and one was taken to Tan Tock Seng Hospital, SCDF said.

Four suffered head injuries and the hospitals were alerted to be on standby to receive the casualties.

It is understood that the taxi driver was in the Intensive Care Unit (ICU). The other four casualties are said to be passengers of the taxi.

They include a man and a woman in their 70s, who are husband and wife, Shin Min Daily News reported.

Three of the passengers are also in ICU, according to the Chinese evening daily.

Police said the incident is being investigated.