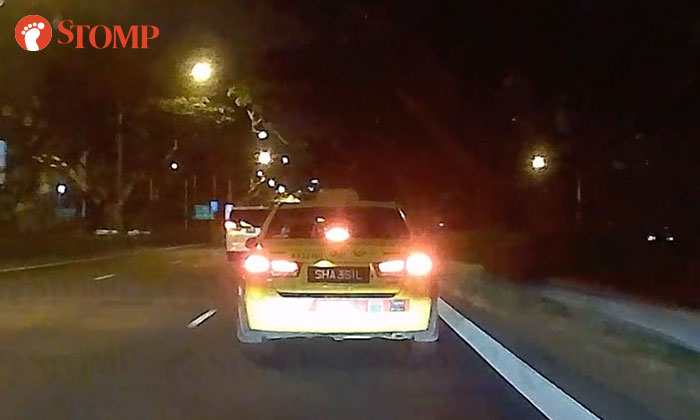 Stomper Eugene came across a lane hogging CityCab driver on the East Coast Parkway (ECP) towards the Marina Coastal Expressway (MCE) on Sunday (April 22) at about 10.37pm.

Eugene told Stomp that he noticed the cab SHA351L was hogging the rightmost lane, used to overtake other vehicles, despite the other lanes being empty.

As the taxi was moving at a slow pace, a long line of vehicles had formed behind it.

Eugene flashed his car’s high beams at the taxi driver to get him to change lanes.

However, instead of doing so, the taxi driver slowed down, forcing Eugene and other drivers behind him to engage their brakes in order to avoid hitting the vehicles ahead.

Eugene said that he and the other drivers had to move onto another lane to overtake the taxi driver.

“This is not the first time I have come across taxi drivers hogging the overtaking lane, but it is very dangerous when they decide to play punk and use their brakes unnecessarily.

“This can lead to traffic accidents.”