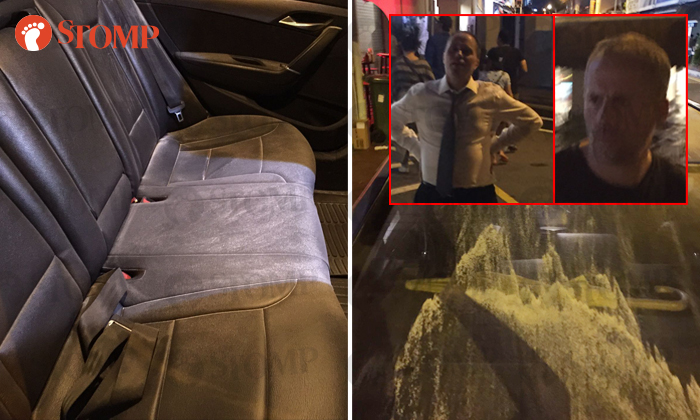 One of two passengers that Stomper Danny picked up yesterday evening (Aug 31) allegedly sprayed a fire extinguisher on both the interior and exterior of his taxi, while the other was paying the fare.

Danny, the taxi driver, told Stomp that the two men boarded his cab at a bus stop along Marina Bay Sands at around 7.43pm.

He said, "I only realised that they had a fire extinguisher with them when they were in my taxi. However, I did not suspect anything because one guy was wearing formal attire.

"Since it was a short trip, I thought maybe they were just bringing the fire extinguisher to their shop or something."

Danny brought them to their destination at Arab Street anyway -- and that was when things got messy.

"One guy (in a white formal shirt) paid the fare of $11.35 while the other (in a black t-shirt) started spraying the fire extinguisher while alighting my taxi.

"I was keeping my money when I saw that my whole car was filled with white mist.

"I immediately got out, locked my doors and chased after the two guys.

"The guy in the black shirt was spouting a lot of nonsense. He then hid the fire extinguisher behind a bin and left."

A video that Danny filmed shows him trying to confront the man who had apparently sprayed the fire extinguisher. He appeared to be flagging down another taxi.

The Stomper continued: "I called the police, who came down to the scene and brought the extinguisher back for evidence. However, the two guys had already slipped off by then.

"I hope these jokers will get caught, be it through social media or the police."

In response to media queries by Stomp, police said they were alerted to a dispute along Arab Street on Aug 31 at 7.52pm.

Upon police arrival, it was established that this was a case of mischief.

Browse the gallery above to see how various parts of Danny's taxi were stained with white substance from the fire extinguisher.

Related Stories
Men smoke in taxi and refuse to get out: One even says, 'Can you take a picture for us?'
'Haolian' guy shows off $1,000 notes to cabby, tells him 'why you can't achieve great things'
Obnoxious passenger evades $15 fare then threatens cabby to 'call police'
More About:
cabby
taxi
taxi driver
mischief
prank
dispute
passenger
passenger sprays fire extinguisher