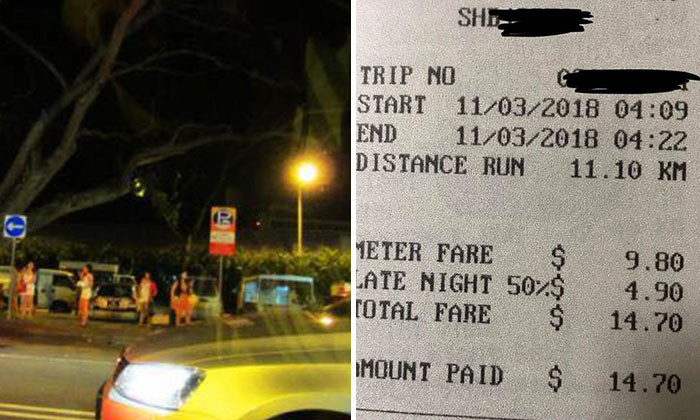 A taxi driver picked up an ill streetwalker and decided to send her home for free after coming to know about her tragic story.

The cabby, Paul Chua, subsequently wrote about the encounter in a post on Singapore Taxi Driver's Faecbook page.

In the post, Paul said that he had picked up the woman along Geylang Road, beside Lorong 18 Geylang, on Sunday morning (March 11) at around 4am.

Paul noticed the frail-looking lady flagging for cabs not far away from him.

A few cabs stopped for her but all the drivers turned her away.

Paul felt that something was amiss.

“Something was wrong with this lady.

“She didn’t look drunk to me, from experience, I predicted that she didn’t have money for the taxi trip.

“That would be the only reason why all the taxis rejected picking her up.”

Despite having some reservations, Paul ultimately stopped for her as he could tell that she was unwell and in a hurry to catch a ride.

“She looked sick to me as she kept bending down to catch her breath.”

“Out of curiosity and compassion, I drove forward to this lady and wind down my window to ask if she needed help.”

With her fingers crossed in a begging gesture, the woman confessed that she had only $10 on her and she needed to go to Indus Road.

In ragged breaths, she pleaded with Paul to take her there.

So he thought to himself, ‘Why not?’ and decided to pick her up.

Along the ride, the woman told Paul about her ordeal.

Apparently, it was her first day working in Lorong 16 Geylang but due to a fight earlier, there was a raid by the police.

The raid inadvertently dispersed the crowd, and she was unable to get any business for the night.

She could not even afford a cab home and had to borrow $10 from another sex worker.

Paul asked her if she tried looking for another job, and she revealed that she was suffering from kidney problems.

Her illness left her with a weak constitution, and she was unable to stand, or even be in an aircon room for prolonged periods.

Left with no other means of survival, she resorted to working as a streetwalker.

She professed that despite her dire circumstances, she was proud that she did not turn to begging, stealing or cheating other people.

Despite her flaws, she managed to make a living based on her own ability.

Upon hearing her tale, Paul suddenly felt ashamed at having taken the only $10 she had.

“I looked away as I did not want her to see my watery eyes. I know these tears were borne from both shame and compassion.

“I stole glances at the lady. She looked worn out, probably due to her life’s experience and her sickness.

“But she wore thick makeup and I could tell that she was trying her best to look good. She (also) wore a sexy dress.”

As they were reaching the destination, the lady pulled out a long-sleeved shirt from her handbag and draped it over herself.

Paul realised that she must have done so as she did not want her neighbours to see her dressed in such a provocative manner.

When they reached her block on Indus Road, the lady thanked Paul profusely for sending her back home.

Paul then took out the $10 bill she had handed to him and placed it back in her hands.

He told her to take the money and get herself breakfast.

“At this moment, I thought I saw tears in the lady’s eyes, just as my own vision started to blur due to my own tears.

“I hurried her off (as she kept thanking me), and I didn’t want her to see me cry for her.

“I am a proud person and I will never want others to shed tears for me. I think this lady is a warrior in life and she also feels the way I do.”

As he drove out of the carpark, tears started rolling down Paul’s cheeks.

He could not stop feeling pity for the lady even if he knew she would not have wanted him to.

The pain of having to work as a sex worker at an elderly age, all while having health problems, was too much a burden.

“I did a good deed tonight. I feel satisfied and I want to thank the taxi driver uncle who gave me a free ride about 16 years ago.

“I wouldn’t have done this good deed tonight if not for him.

He also encouraged other taxi drivers to help out passengers in need:

“If you think my story is inspiring to you, please try to help people who are honest about not having enough money for the ride.

“At least they are honest. Do give a helping hand if it’s not too troublesome for you guys.”

All's well that ends well though, and Paul received three current jobs (CJ) and the fare amounted to almost $42.05.

After that, the passenger even handed Paul $50 and told him to keep the change.

The world sure works in mysterious ways.