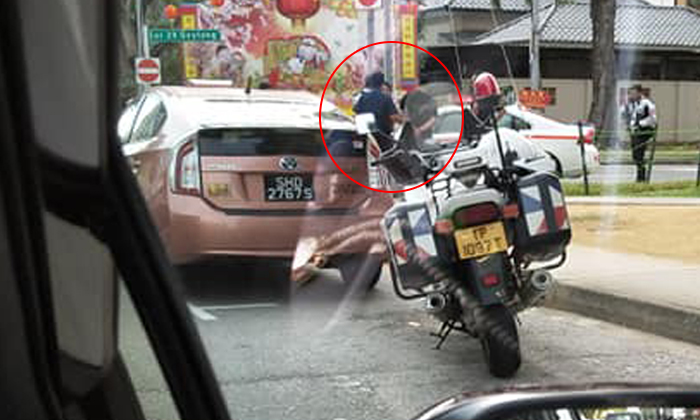 A 41-year-old taxi driver was arrested along Sims Avenue on Tuesday morning (Jan 15) for suspected drink-driving.

Fellow cabby Jimmy Lim, who posted photos of the incident on Facebook, said he saw Traffic Police (TP) officers handcuffing the suspect when he passed by the scene at around 8.38am.

When contacted by Stomp, Jimmy shared: "It didn't look like there was an accident and you don't normally see handcuffs for traffic offences, so I thought something big might have happened.

"At first, it was just one TP officer at the scene. Subsequently, more came.

"I also saw a woman there."

In response to a Stomp query, the police said they had conducted checks on the man at 8.37am.

Stomp understands that he was stopped by officers after being seen without a seatbelt.

The cabby allegedly smelt of alcohol and had a passenger in the Prime taxi.

He was subsequently arrested.

A Prime spokesman said that it was conducting its own investigations into the incident, adding: "We take safety very seriously. Once the company's and police investigations are concluded, we will release more details."