Cabby and GF assaulted maid in Yishun flat over trivial matters, even choking and biting her 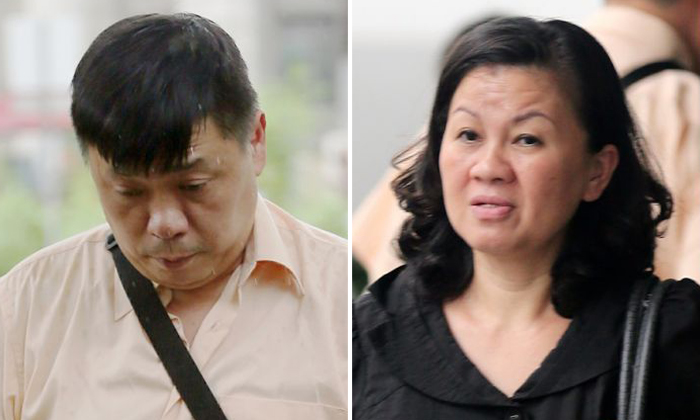 Shaffiq Alkhatib
The Straits Times
May 8, 2019

A taxi driver and his girlfriend assaulted an Indonesian domestic helper over trivial matters, even choking and biting her.

When Ms Junairiyah Junaedi Artawi, 33, failed to inform cabby Lim Kheng Soon that she wanted to return to her home country, Lim slapped and choked her.

And when the 46-year-old noticed that the floor in his Yishun flat was still damp after she cleaned it, he kicked her.

His live-in girlfriend, human resource executive Jecyn Penpelnel Chong Siew Moi, slapped and bit Ms Junairiyah after she found out that the maid had left her daughter's milk bottle in a sink.

Lim was sentenced on Wednesday (May 8) to three months and eight weeks' jail after pleading guilty to two assault charges. He was also ordered to give $1,000 to Ms Junairiyah as compensation.

Chong, who had admitted to an assault charge, will spend eight weeks behind bars. The 47-year-old was also ordered to compensate the maid $500.

The Straits Times understands that the couple have two children together.

Chong had employed Ms Junairiyah in 2015 to take care of their then newborn daughter.

The court heard that a washing machine in their home started leaking at around 9am in August that year and water seeped onto the living room floor.

Deputy Public Prosecutor Amanda Han said that Lim became angry when he noticed that the floor was still damp after Ms Junairiyah tried to clean it.

The DPP told District Judge Chay Yuen Fatt: "He kicked her on her thigh, slapped her cheek and grabbed her by the hair as he was scolding her.

"Although the victim kept apologising, he ignored her and continued to hit her. Subsequently, he told the victim that she would have to pay them $2,000 for the floor."

In another incident, Chong assaulted the maid on June 18, 2017, after she found out that Ms Junairiyah had left the milk bottle in a sink.

Lim became angry with the maid again eleven days later after she informed Chong's brother of her wish to return to Indonesia instead of telling him.

"Thereafter, he started strangling her by the neck with one of his hands."

A neighbour spotted him attacking Ms Junairiyah and called the police. The maid was later taken to Khoo Teck Puat Hospital where she was found with tenderness over her right upper back and a swollen right ring finger.

The couple are now out on bail of $5,000 each and will surrender themselves at the State Courts on May 31 to begin serving their sentences.

Under a law passed by Parliament on Monday, people who commit any crimes against vulnerable people, such as young children, maids and the disabled, can be arrested by the police even without a warrant.

If found guilty, their punishment can be twice the maximum penalty, compared with 1½ times previously for some offences such as maid abuse.

Related Stories
Couple forced maid to do chores only in bra and short pants, caned her, made her eat own vomit
Couple who hit maid, forced her to pour hot water on herself and starved her gets convicted
Condo resident abused maid and broke her nose, monitored her through CCTV cameras
More About:
maid
abuse
maid abuse
court