Cabby, 73, trapped in taxi after accident with SAF vehicle in Pioneer Road North 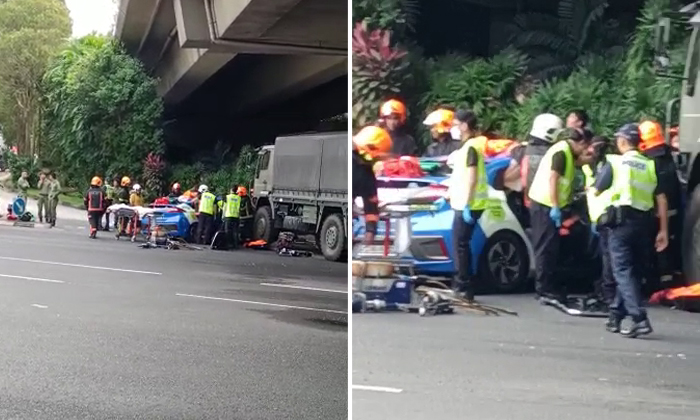 A 73-year-old taxi driver was found trapped in the driver’s seat and taken to hospital on Tuesday, after an accident involving a Singapore Armed Forces (SAF) vehicle in Pioneer Road North.

The Singapore Civil Defence Force told The Straits Times that it was alerted to the accident at about 10.45am, and when it arrived on the scene, a person was found trapped in the driver’s seat of a taxi. SCDF rescued the man with the use of hydraulic equipment.

The police said the taxi driver was conscious when taken to National University Hospital.

In response to queries from The Straits Times, ComfortDelGro’s group chief branding and communications officer Tammy Tan said: "Our taxi was travelling straight with the traffic light in its favour when it was hit by an SAF vehicle executing a right turn from the opposite direction."

She said there was no passenger in the taxi and that the company is in touch with the driver’s family to assist him as he recuperates.

The Ministry of Defence said it was aware of the accident and assisting police investigations. No SAF personnel were injured, the spokesman added.

Footage circulating on social media shows the blue taxi and SAF truck having collided under a flyover, with SAF personnel helping at the scene of the accident.