Buying over $400 worth of products online? Take note of whether you have to pay GST charges first 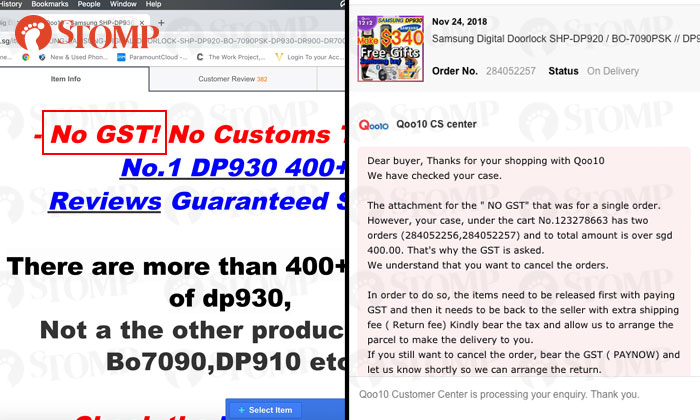 Shopping online is usually an easy and stress-free experience for Stomper Jared but recently, he was frustrated when he was told he needed to pay Goods and Services Tax (GST) only after he bought a pair of digital door locks online.

He had ordered two Samsung digital locks from a seller on online marketplace Qoo10 for $478.80 on Nov 24 after seeing a notice on the seller's page that stated: "No GST! No Customs Taxes."

"I shop online a lot so I know to read through everything before buying anything," he said.

"I'm aware of some online stores that absorb GST and taxes so I thought that this is what the seller meant." 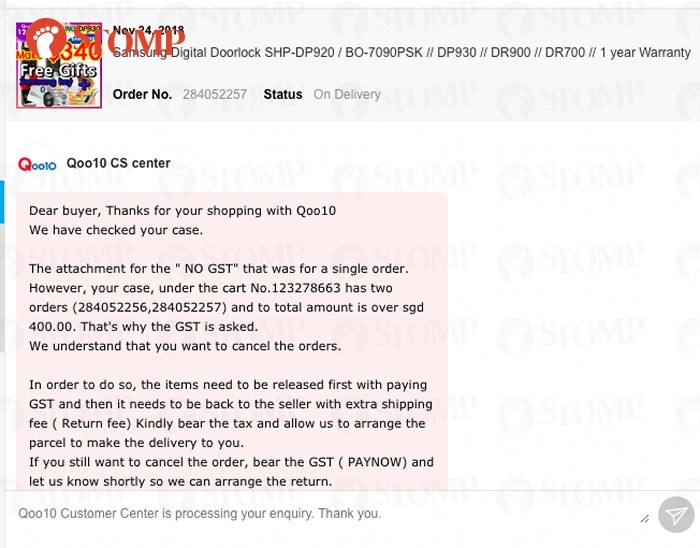 However, after contacting Qoo 10, it was explained to him that if he had bought only one lock, he would not have had to pay GST as his order would be under $400.

He was charged because his total bill went over $400.

According to the Ministry of Communications and Information, GST relief is given for goods imported by post or air for amounts up to $400 per shipment.

However, if the value exceeds $400, there is no GST relief and GST is payable on the total value of the shipment.

In the end, Jared paid a tax amount of $45, including an administrative fee.

"I think that the seller should have been more clear about the tax charges," he said.

He shared an example of another seller who he believes is very clear in explaining GST charges.

"I'm sharing this to warn others to keep this in mind when buying products online."

Related Stories
Reality is far from expectations for these Stompers who bought items online
Carousell user says dress has "no defect" -- but buyer gets it with stains, torn seams and odour
Shopping for Valentine's Day gifts online? Don't end up like this
More About:
online shopping