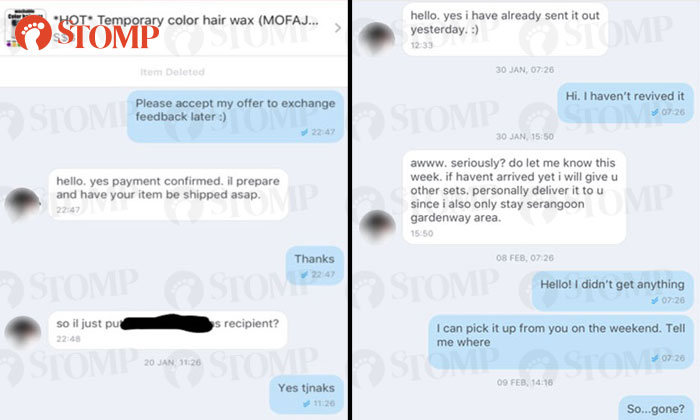 For all the conveniences online shopping offers, there are also risks.

Stomper CeePella learnt this the hard way after an unpleasant experience with a seller on online marketplace Carousell.

She had placed an order for two jars of temporary colour hair wax for $16 in January and had transferred the money to the seller.

However, the conversation dragged on for over a month after she told him that she had not received the items.

He initially apologised and even offered to deliver another set to her personally but never did.

He then went MIA over the Chinese New Year weekend before telling her that he would send his friend over to deliver the products to her.

After that he told her that they ran out of one of the colours she wanted and offered to give her another one "free of charge" to "compensate" for her allegedly "lost mail".

At that point, she felt that the exchange had gone on long enough and agreed.

He then apologised to her again on Feb 13 but she has not heard from him since.

Read their conversation in the gallery above.

"I've dealt with many lovely Singaporeans with integrity and honesty - as most of us are and this is the first time I've met one who is a cheat," she said.

"I suppose it's inevitable and a lesson learned, so I wanted to share it."

Here are CeePella's signs you're getting cheated online:

"Don't pay the full amount upfront, although I've done this more than once.

"Try giving 50 per cent and the rest when you get the item."

"The seller does not 'accept offer'.

"Now here is how a seller games the system.

"Carousell only allows you to leave feedback if the seller accepts an offer.

"So after I was cheated, I wasn't even allowed to leave a negative review, which brings me to..."

"Be suspicious when there are no negative reviews!

CeePella reported the matter to Carousell and a customer service officer helped to manually add a feedback on the seller's account for her.

"This will be the ONLY negative response this seller has - smart," she said.

She also made a police report regarding the incident on Feb 28.

Related Stories
54-year-old man arrested over RWS and MBS staycation scams on Carousell
2 men arrested for theft after allegedly swapping seller's $35,000 Rolex with fake during meetup
Missed out on tickets to Bruno Mars' concert in Singapore? You can get them online...for $999
More About:
cheat
cheating
bad service
Carousell