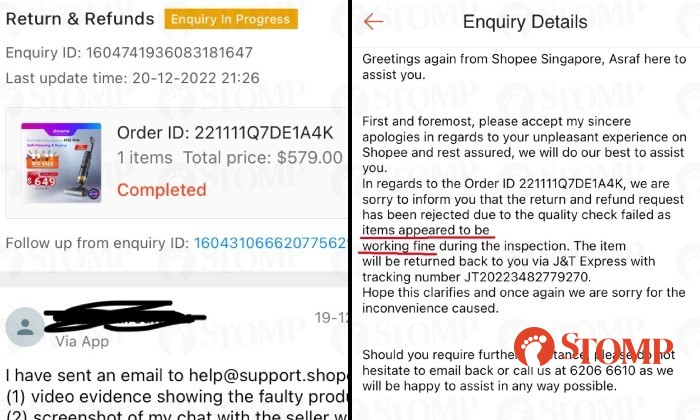 His Dreame turned into a nightmare.

A Shopee customer said that a seller agreed to a refund for a faulty vacuum cleaner, but after the appliance was returned, Shopee said it "appeared to be working fine".

Stomper David had bought the Dreame H12 Pro for $579 from the Dreame official store on Shopee in December.

"However, the vacuum which arrived was faulty," recounted the Stomper. "Sometimes it would turn on, but it would randomly refuse to start and display an error message.

"Since it was still within the return/refund period, we informed the seller that we would prefer to return the vacuum and get a full refund."

David shared a screenshot of the chat with the seller where the seller replied: "Sure, will respect your decision. You may raise the case via Shopee."

The Stomper said: "We raised the return/refund request and returned the vacuum to Shopee. This was done on Dec 7.

"On Dec 14, Shopee rejected the return/refund request without any explanation. We tried to contact Shopee customer service multiple times and spoke with no less than four different agents who were not helpful at all.

"Finally, on Dec 19, Shopee wrote back to explain that it had rejected the request 'due to the quality check failed as items appeared to be working fine'.

"This was despite submitting video evidence of the product displaying an error message and refusing to start and a screenshot of the chat with the seller where the seller agreed to the return/refund.

"It was wrong of Shopee because the problem with the product was that it would randomly stop working. A one-off test to turn it on does not mean that the 'items appeared to be working fine'.

"More importantly, an agreement had been reached between the seller and buyer for the return/refund of the product. It was wrong of Shopee to unilaterally interfere with the agreement." 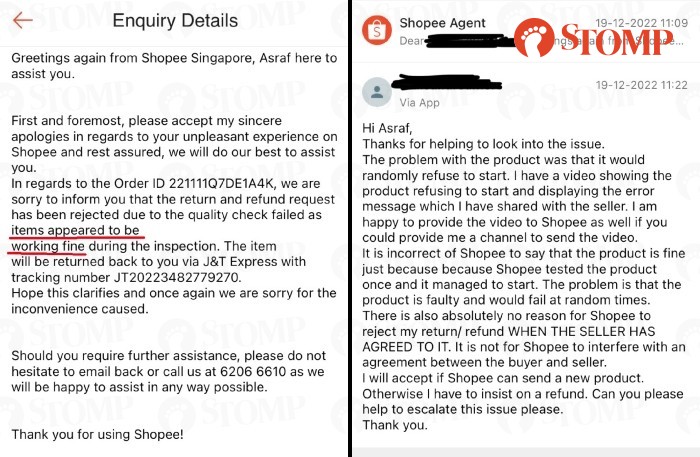 On Jan 4, Shopee e-mailed the Stomper that the vacuum cleaner had been delivered to the seller on Jan 3 and was undergoing "the quality check process from their end".

The e-mail said: "The seller has advised that they will provide us with a further update once the verification is done, which will take two to three business days."

"Rest assured that we will monitor this closely from our end and will provide you with further updates since the seller has concluded their QC process."

After more than three days, David told Stomp on Jan 8 that Shopee had yet to contact him.

"I'm afraid my nightmare with Shopee continues," said the Stomper.

In response to a Stomp query, Shopee said Jan 11: "We are aware of this issue, and worked with the seller to address David's concerns.

"After consulting with the seller, we are processing a full refund for David's purchase.

"We thank David for bringing this to our attention, and apologise for the long wait for a resolution."