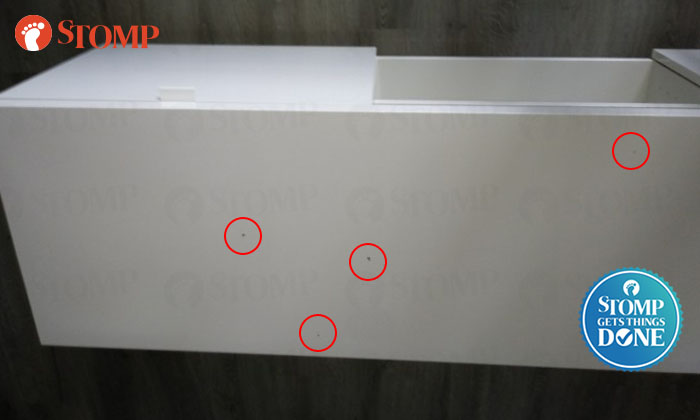 Stomper Kenneth purchased a white television bench from IKEA's website, only to find that it had four holes on its topmost panel when the item arrived.

He had bought the item from the IKEA Online Store and the product was shipped from IKEA Alexandra.

Kenneth said that he bought the item on Oct 21 and received it on Oct 23, where he noticed the defect after assembling the product.

He said he contacted IKEA Alexandra via their hotline on Oct 24 and spoke to a female staff member.

According to him, she offered to replace the defected top panel.

However, he was afraid that the connected panels and screws might get damaged if he tried to disassemble it.

He said that he then requested for a discount for the defected item.

That evening, Kenneth said that he was offered a $10 discount, which he feels "is not a sincere at all", as he had paid $179 for the original price plus $70 for shipping, which added up to $249.

He added that although it is a cosmetic defect rather than a functional defect, it is unacceptable to receive a brand new item in this state.

He further said: "In addition, their discount coupon is not a refund. I have to buy something to be able to use the coupon."

On the same day, the staff member called back offering a 1-for-1 exchange with the need to dismantle the bench and assemble the new one onsite.

Kenneth did not want to do this as he did not have time to have a person dismantle and put together the product in his home.

According to Kenneth, she said the standard way Ikea deals with defects is to refund the customer five percent to 10 percent of the amount they paid for the product.

Kenneth felt that this was unfair and told her that "20 percent of $249 would be fair”.

After this, Kenneth supposedly asked to speak to a manager, as she could not help him.

According to him, the staff member said the manager was not around, but that she would call on Oct 25 or Oct 26.

The next day (Oct 25), Kenneth said he called IKEA's hotline again and spoke to a male employee, who said that the female staff member was on her break.

Kenneth said: "When I asked to be able to speak to the manager, the male employee said that the manager was out of town till Monday."

Despite leaving a message to speak to the female staff member with the male employee, she apparently did not get back to Kenneth.

On Oct 29 at 3.11pm, Kenneth said he called IKEA Alexandra again and another female employee spoke to him.

He said that he asked to speak to the manager again, but she said that there was no manager available.

He said: "Upon asking the status of my 20 percent defect discount request, she confirmed my mobile number and asked me to hold while she checked.

"I confirmed that checking would take 10 to 15 minutes, so I asked her to call me back."

Kenneth said that at 5.35pm he had not received their call.

"I feel disappointed when I see the holes on the bench while watching TV," he added.

In response to a Stomp query, an Ikea spokesman said: "At IKEA it is important to us that our customers are happy with their IKEA purchase.

"Whenever a customer feedback a product issue, we will evaluate and determine the cause.

"In the rare case of a manufacturing defect, our Customer Service department will evaluate the situation and provide options of either an exchange of the item or a replacement of the affected part together with free delivery and assembly services.

"While in situations where the customer is not looking for a 1-to-1 exchange, taking into consideration that the functionality of the product is not affected, a discount on the item will be offered.

"Our agents have been trying to reach Mr Kenneth for an available time slot for us to contact him to better address his concerns, and are still awaiting his reply.”

Kenneth has been contacted by IKEA and they have come to an agreement on how to settle the matter.

Kenneth added: "Thanks to Stomp, now when I look at my TV and console, I'll be 'consoled' that the issue has been resolved."