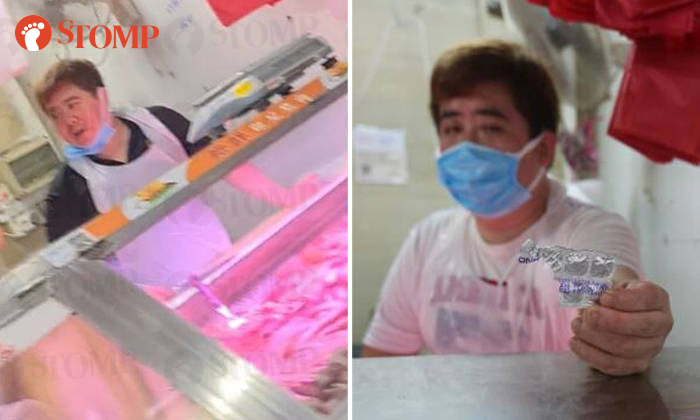 A butcher who was counselled and warned for not wearing his mask properly while at work has given his side of the story.

In a report on August 27, Stomper T said she had noticed the butcher at Kopitiam Square in Sengkang not wearing his mask properly on multiple occasions.

She also said this had been happening "for a few months" ever since the circuit breaker ended.

This prompted investigations by F&B operator Kopitiam, who said the butcher has been counselled. A warning letter was also issued to both the staff member and the licensee.

However, the Singapore Food Agency (SFA) said no lapses were detected during its inspection of the food stall.

Wang said that he has been on daily medication since September 2019 due to high blood pressure. Coupled with his small working space and breathing difficulties while at work, he pulled down his mask to breathe.

He added: "It's not that I am without a mask the whole time. My work requires effort so I tend to experience breathing difficulties, but I will be more mindful in future."

According to Wang, many customers approached him after reading about him on Stomp but were fortunately understanding towards him.

Wang, who has been working in Singapore for 10 years, said that he has always followed the rules and that the incident has affected his business, which saddens him.