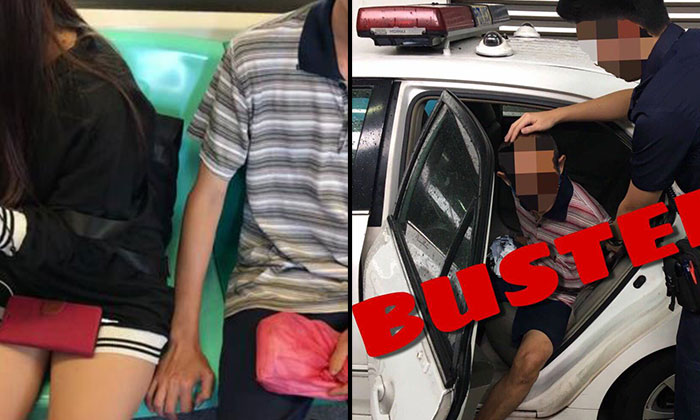 Update on July 7: The man has been charged in court with outrage of modesty.

The man who was caught on video touching a woman's thigh on an MRT train on July 1 has been arrested by the Police.

In an earlier article, Stomper Andy alerted Stomp to Winna Chin's video that she had posted on Facebook, which showed the man pretending to be asleep first, before moving his fingers onto the thigh of a female passenger who was sitting beside him.

The arrest was announced on a post on July 5 by Hougang Neighbourhood Police Centre (NPC) on their Facebook page.

"Today, Police received a tip off from a member of public.

"Acting on the information, officers from Hougang NPC sprang into action and combed the vicinity of Hougang Central.

"Their efforts paid off as they managed to locate and detain the male subject.

"The subject was subsequently placed under arrest, and is currently assisting in Police investigations.

"Hougang NPC assures all our residents that we will continue do whatever it takes to keep the community safe and bring perpetrators of the law to justice."

The 44-year-old man was arrested for his alleged involvement in a case of Outrage of Modesty, said the Police in a press release.

Officers from Jurong Police Division and Public Transport Security Command established the identity of the suspect through extensive ground enquiries.

Acting on a tip off from a member of the public, officers from the Ang Mo Kio Police Division then arrested the suspect at Hougang Mall on July 5, at 4.45pm.

Winna also contacted Stomp to clarify that she did not confront the man as she was afraid that he would turn violent.

Instead, she told the female passenger to stand up and leave.

"I didn't confront the guy as I was afraid he would turn violent.

"However, I did ask the girl to stand up but she chose to only move nearer to her friend and not move away.

"Her friend slapped the guy's hand after that and he got off at the next station.

"Thanks for all the comments and shares."