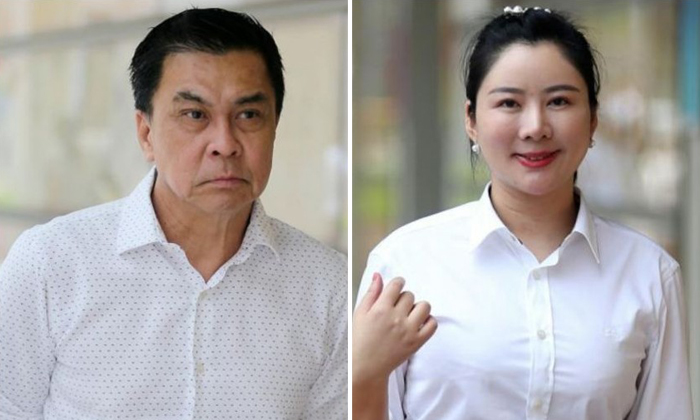 A businessman's four-year court battle to get back $2 million from his former mistress has ended in defeat.

Mr Toh Eng Tiah will no longer be able to recover any money from Ms Angelina Jiang, who is 25 years his junior, following a decision by the Court of Appeal last Friday .

It brings to a close a court saga that began in 2017 when the married businessman sued his former mistress, claiming the $2 million he had transferred her through a series of payments during their relationship consisted of loans.

Mr Toh, who has three grown-up children from a previous marriage, met Ms Jiang in November 2016 when he was 55 and she was 30.

They began a romantic relationship the following month but by May 2017 they had grown apart.

He later sued Ms Jiang at the High Court to try to get the $2 million back.

Mr Toh, whom the Straits Times understands is a director and shareholder of several companies including a recycling firm, relied on a loan agreement signed in March 2017 as evidence to support his claim.

But Ms Jiang said the sums she received were gifts instead.

She claimed that the 2017 agreement, signed by them both, was a sham document to placate Mr Toh's wife, improve his standing among his family and friends, and obtain a loan from one of his companies.

Last year, the High Court held that about $680,000 of the $2 million sought was transferred to Ms Jiang as gifts and not recoverable by Mr Toh.

It ruled that he should be repaid $1.12 million once such a sum became due under the loan agreement.

The court said the businessman also had to separately pay Ms Jiang $45,000 that he owed her.

Both Mr Toh and Ms Jiang appealed against the decision.

On Friday, the Court of Appeal overturned the findings on the 2017 agreement, saying it was a sham document and therefore Ms Jiang did not have to pay back the $1.12 million.

However, it upheld the other rulings by the High Court.

The Court of Appeal held that the duo had intended for the 2017 agreement to be used to give an impression to third parties that the money was being loaned to Ms Jiang, even though there was no such loan.

It noted that the agreement said the money was for Ms Jiang to buy a property at 9 Hillcrest Road near Bukit Timah Road. The property was not purchased in the end.

But the $2 million included sums that Mr Toh, represented by lawyers Anthony Lee and Wang Liansheng, had given her for unrelated expenses before the agreement was signed.

"There was no good reason to recharacterise them as loans for the purpose of purchasing 9 Hillcrest Road, as that was obviously false," said the court.

It also said the introduction of the 2017 document as a formal commercial agreement appeared "incongruent", in the light of the earlier monetary gifts and their romantic relationship.

The Court of Appeal also noted that Mr Toh had referred to Ms Jiang as his "wife" as far back as Jan 1, 2017. They had also referred to 9 Hillcrest Road as their "home" in various WeChat messages to each other.

This further supported the claim by Ms Jiang, who is represented by lawyers Mahesh Rai and Stephania Wong, that the money was not intended as a loan.

The three appeal judges disagreed with the High Court's view that two provisions in the Evidence Act applied when considering Ms Jiang's allegation that the agreement was a sham.

The provisions - which deal with proof of the terms of a contract - did not apply as her claim was concerned with whether a contract existed in the first place, the court said.

Related Stories
Businessman, 55, sues mistress, 33, to recover $2 million 'loan' -- which she says was a gift
Businessman sent mistress sexually intimate texts even after feeling cheated over $2m 'loan'
Mistress sued for $2m by businessman says his wife found out about money by bribing tenant
More About:
affair
couple
money
court