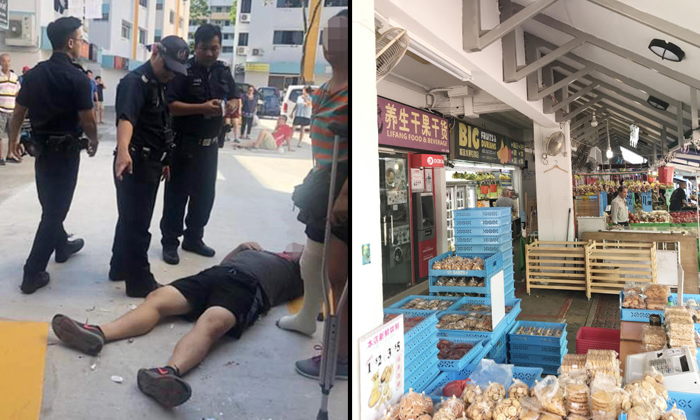 A man and a woman were taken to hospital after a fight broke out at Block 449 Ang Mo Kio Avenue 10 on New Year's Day (Jan 1).

In response to a Stomp query, the police said they were alerted to a case of voluntarily causing hurt at 10.50am.

A 43-year-old man and a 47-year-old woman were conscious when taken to Sengkang General Hospital.

Stomp understands that the fight was over a dispute involving the use of business premises between two couples.

According to Shin Min Daily News, a couple who runs a dry goods store in the neighbourhood started renting out the space in front of their shop through a property agent six months ago.

The couple had told the agent not to rent the space out to vendors who were selling products similar to their own.

However, when a female vendor opened her stall in the space on New Year's Day, the couple discovered that she was in the "same industry".

Worried that their business would be affected, the couple told the female vendor, through the agent, to vacate the space and leave. The vendor compiled.

However, the vendor's husband later returned with a few companions to look for the dry goods store's male boss to discuss the matter.

"Things got increasingly heated and they argued for around 10 minutes," a witness told Shin Min.

The two men then came to blows.

During the altercation, the female vendor was hit in the face and started bleeding.

Her husband reportedly injured his right leg while the male boss of the dry goods store was seen lying on the ground after the fight.

There was also a five-metre-long blood trail along the walkway.

Shin Min identified the female vendor and the male boss as the pair who were taken to hospital.