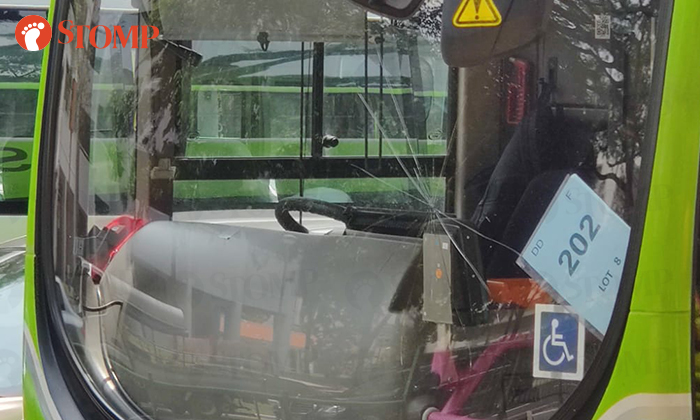 The windscreen of a bus cracked after an accident occurred at a bus stop along Bedok North Road on Friday afternoon (Jan 17).

Stomper MD contributed photos of what he saw and said: "I was going towards Bedok Mall on bus 17 when I saw this happen.

"I was on the lower deck, waiting to alight when the bus suddenly stopped.

"It felt like the driver had slammed on the brakes and I saw an old lady slam into the windscreen.

"She was standing and I heard a loud 'bang'.

"She wasn't carrying much items either.

"I saw that her head was bleeding. The impact seemed to be very hard.

"Didn't stick around to see whether the bus returned to the interchange because I left the scene right after.

"I thought it was quite scary. I was a bit shaken and just shocked."

Responding to a Stomp query, the Singapore Civil Defence Force (SCDF) said: "On Jan 17, the SCDF responded to a call for assistance at a bus stop along Bedok North Road near Block 516 at about 2pm.

"A woman was assessed by a SCDF paramedic."

Stomp understands that the woman, who is in her 60s, had refused conveyance to a hospital.