'Diam diam': Bus passenger goes on expletive-filled rant after being asked to turn down music 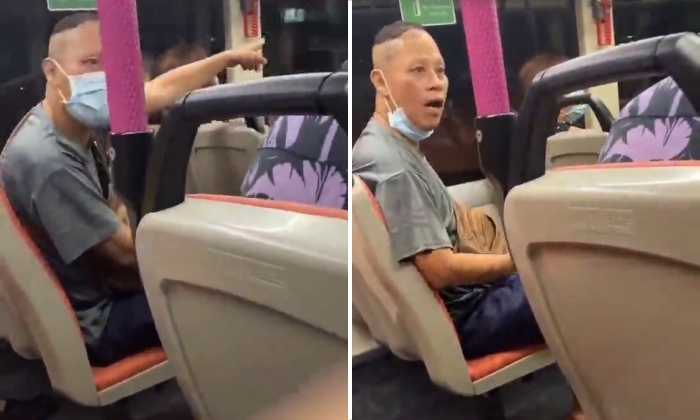 A man went on an expletive-filled rant on the upper deck of a double-decker public bus after being asked to turn down the music on his phone.

Directed at someone sitting across from him, the rant was captured in a five-minute video first posted on Chinese social media platform Little Red Book on Aug 27.

The video is titled "In Singapore encountering a weak-minded uncle" in Chinese.

The description said: "On the bus, my friend nicely asked him to turn down the volume on his phone. After that, this drunk uncle ranted at my friend all the way. He even threatened, do we want to have a fight? Hilarious. Where did he get the courage to challenge three grown men?" 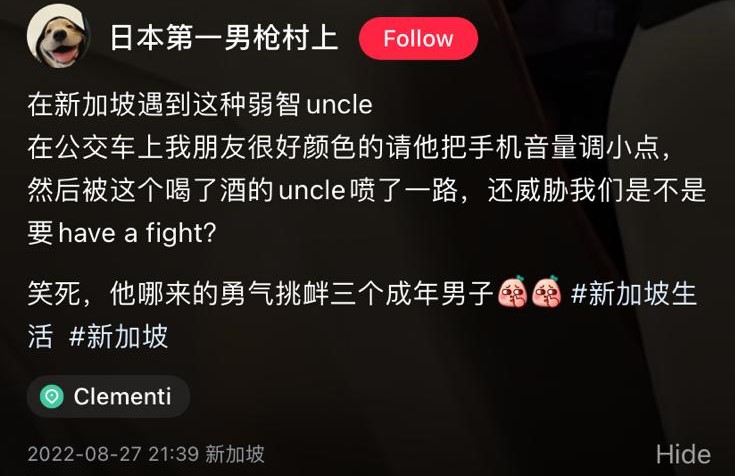 The uncle, sporting a grey T-shirt and an unflattering haircut, spoke in Mandarin at first but started switching to Hokkien about a minute and a half into the video.

He said: "You want to fight with me? Call the police. Tell them I've been drinking and I'm very loud. Right?"

The passenger whom the uncle was ranting at did not react or say anything until a woman sitting behind the passenger leaned forward and spoke to him about two minutes into the video. The passenger responded to her and shook his head. Another male voice can be heard mentioning making a police report in Mandarin.

That was when the uncle pulled down his mask below his chin and continued his rant.

He said: "I'm quietly listening to music. Don't talk so much. You don't know people."

He then mentioned the number 369 a few times, referring to the secret society.

About halfway through the video, the woman left her seat and returned 40 seconds later. She spoke to the passenger in front of her and a male voice suggested getting off the bus.

The uncle continued ranting until the video ended 20 seconds later.

In the comment section of the video, the person who posted it said that a police report had been made and he had just received a call from Clementi police asking for more details.

In response to another comment, the person said that he wanted to fight back, but because they were unfamiliar with Singapore's laws, they did not know whether they would be penalised for it.

Related Stories
Man goes 'raving mad' after woman asks him to turn down music, both want to Stomp each other
Uncle watches lewd video on bus with volume up high
Commuter blasts loud music on train
More About:
Bus
music
drunk
inconsiderate passenger