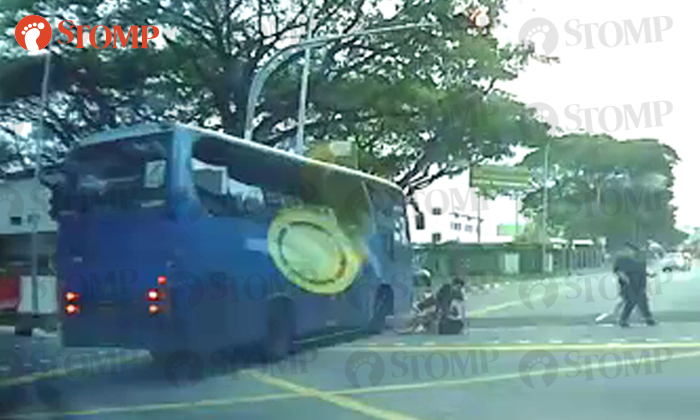 A cyclist was hit by a bus that beat the red light while he was crossing the road on his bicycle.

Stomper Izzy contributed a video of the incident, which he said he received from a colleague.

According to a time-stamp on the video, the accident occurred on April 13, at around 6.42pm.

"From what I heard, no one was crucially injured. This footage can be provided to people who might need video evidence for claims against the driver."

The video shows how the bus beat the red light despite pedestrians crossing the road.

It hit a cyclist, who was thrown off his bicycle.

The cyclist then got up, picked up his bicycle and continued crossing the road, while a woman rushed to his aid.

Related Stories
86-year-old e-scooter rider injured after accident with bus in Yishun
Cyclist in coma after suffering head injuries in accident with van at Tanjong Katong
Cyclist nearly hit by taxi after riding across road when traffic light not in her favour
More About:
cyclist
accident
Bus